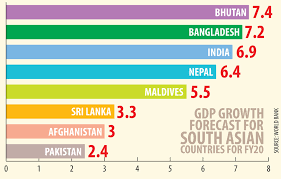 Economy of Bangladesh will grow faster than all other economies except Bhutan in South Asia, a World Bank forecasting released yesterday said.

The latest edition of World Bank’s “South Asia Economic Focus, Making (De) Centralisation Work”, said the gross domestic product in Bangladesh is projected to moderate to 7.2 per cent this fiscal year and 7.3 per cent the following one.

The report said Bhutan’s GDP growth is expected to jump to 7.4 per cent this fiscal year.

“The outlook is clouded by rising vulnerability in financial sector, but the economy is likely to maintain growth above seven per cent, supported by a robust macroeconomic framework, political stability, and strong public investment,” the WB report said.

In line with a global downward trend, the growth in South Asia is projected to slow to 5.9 per cent in 2019, down 1.1 percentage points from April 2019 estimates, casting uncertainty about a rebound in the short term.

The report finds that the strong domestic demand, which propped high growth in the past, has weakened, driving a slowdown across the region.

In a statement, Hartwig Schafer, vice president of the World Bank for South Asia said declining industrial production and imports, as well as tensions in the financial markets,  reveal a sharp economic slowdown in South Asia. “As global and domestic uncertainties cloud the region’s economic outlook, South Asian countries should pursue stimulating economic policies to boost private consumption and beef up investments.”