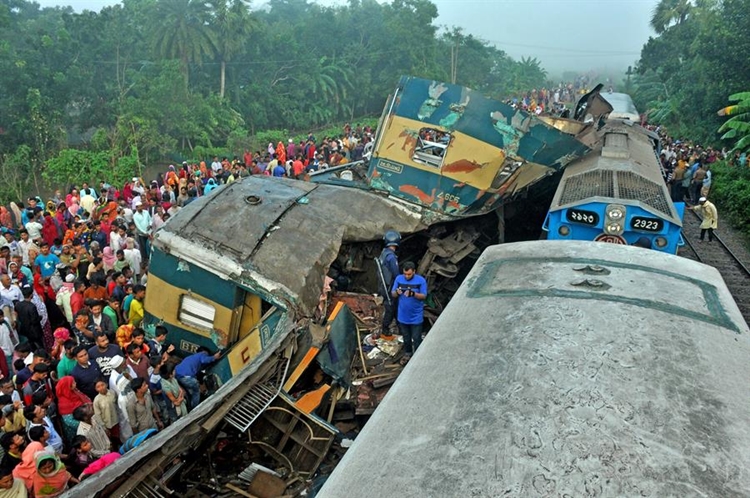 Some 12 train accidents took place on the loops of railway tracks in the country in the last six years, but none of them caused death except Wednesday's crash.

The latest accident which killed at least 16 people occurred on the loop at Mondobhag Railway Station at Kasba in Brahmanbaria after Dhaka-bound Turna Nishita hit Chattogram-bound Udayan Express coming from Sylhet.

According to official records, Bangladesh Railway (BR) has experienced four major accidents due to head-on collision between two trains since 2009.

Of them, an accident at Narsingdi station in January 2010 claimed the lives of nine people including six railway staff. The locomotive master was among the victims.

In 2014, another head-on collision between two trains at Ullapara also claimed the lives of three people including one railway employee.

The record also showed that it was for the first time a train accident occurred on the loop in the last six years since 2014 for violating the signal which caused deaths.

Eight incidents of the derailment were also recorded on the loops by BR.

However, BR has a record of averting collision of 16 train accidents of which three were about to occur on the loops during the period.

"But the Wednesday's rail accident took place on the loop while one of the two trains was changing the track which was initially reported for defying the signal," said an official.

The official records also showed that a total of 868 train accidents happened in the last six years, killing 111 people and injuring 298 others.

Highest 99 deaths were recorded in the accidents which occurred at rail gate crossings. A total of 639 train derailments were also recorded in which nine people were killed.

In last June, five people were killed and 67 others hurt after six carriages of Dhaka-bound "Upaban Express" coming from Sylhet derailed at Baramchal in Kulaura Upazila of Moulvibazar.

The official said five committees were formed to probe the latest accident. They have already started investigating the cause of the accident.

He also visited Dhaka Medical College Hospital and National Orthopaedic Hospital on Wednesday night to see for himself the injured people.

The official said nine people were undergoing treatment at National Orthopaedic Hospital while three at DMCH, seven at Combined Military Hospital, one at Brahmanbaria Hospital, two at Cumilla Hospital and five at Osmani Medical College Hospital.