Is it possible to remove rickshaws from Dhaka? Experts say ‘yes’ 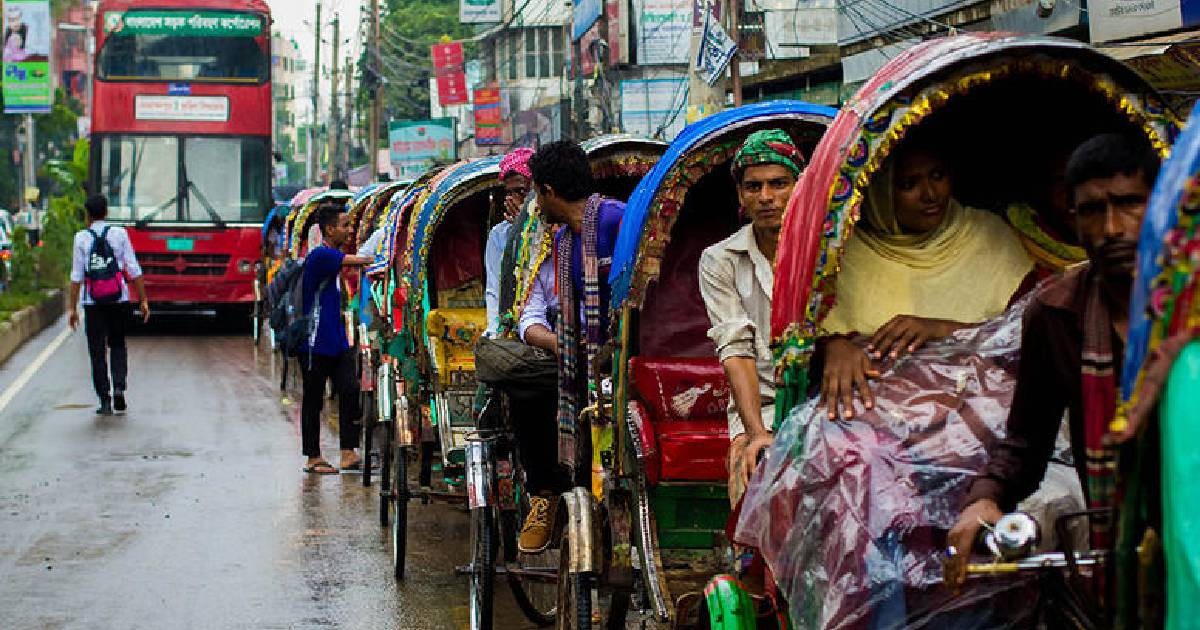 Though rickshaws are largely blamed for slowing down Dhaka’s traffic, the authorities concerned are unable to remove the three-wheelers from the capital for lack of a comprehensive plan, said experts.

They also said the huge illegal business that has grown over the years over rickshaws is one of the major barriers to removing the slow-moving three-wheelers from the capital.

According to them, a strong political will of the government alongside ensuring adequate modern buses under franchise companies and effective traffic management and strict enforcement of law are necessary to make the main streets of the capital free from rickshaws.

The undivided Dhaka City Corporation (DCC) issued licenses for around 79,554 rickshaws in 1982. Since then, the city authorities have been renewing those but do not issue any fresh ones.

However, the number of unauthorised rickshaws is sharply increasing day by day for lack of monitoring and week enforcement of law.

According to information provided by officials of the two city corporations and Dhaka Metropolitan Police's traffic department, there are now around 11 lakh rickshaws in the capital.

Prof Shamsul Hoque said rickshaws must be removed from all the main roads in phases through proper planning and strong enforcement of law. “Rickshaws not only slow down the speed of motorised vehicle, but also create chaos on roads.”

He said the average speed of motorised vehicles on the city main streets is about 20km per hour, but those are forced to run within the speed of 6-7 km an hour because of the haphazard movement of rickshaws.

Prof Hoque said the number of rickshaws is growing gradually as there is no monitoring and the enforcement of law by the authorities concerned.

He said the number of public buses should be increased introducing the franchise system as soon as possible. “The government can first introduce the bus franchise system and then evict rickshaws from main roads in phases.”

The transport expert said some ruling party-backed organisations create obstacles whenever any move is taken to evict rickshaws as they are doing illegal business and making huge money by providing licenses, route permits, producing new rickshaws and setting up garage. “So, they raise their voice and create troubles to thwart the move to remove rickshaws.”

“The government’s strong political will is necessary to get rid of such problem. Even, a pro-worker left government in Kolkata removed rickshaw from the main roads in 1998. There’s no alternative to imposing a ban on rickshaws on the main roads to allow motorised vehicles to ply with a logical speed,” he observed.

Iqbal Habib said, “Now, we’re not in a position to completely remove the rickshaws from the capital for lack of adequate public transport. We won’t be able to clear rickshaws from Dhaka without ensuring its alternative.”

“After the Holey Artisan cafe attack in 2016, then DNCC Mayor Annis Bhai took steps to evict rickshaws from the main roads of Gulshan, Banani and Baridhara. He introduced “Dhaka Chaka” to solve the mass transport crisis, and then introduced rickshaw zoning system to clear the main roads from such vehicles. He fixed specific number of legal rickshaws with unique colour for the inside roads of each area, and thus removed the three-wheelers from the main streets without any protest. So, such well-planned approach is needed to get rid of rickshaws,” Habib observed.

He said the city authorities whimsically ban rickshaws on some main roads without any plan and finally fail to execute it. “The government should have strong monitoring to prevent the production of new rickshaws and remove the illegal ones gradually.”

Contacted, urban expert Prof Nazrul Islam said it is not possible to completely remove rickshaws from the capital without its suitable alternative.

He said public transports like bus and auto-rickshaw, taxi together with commuter train service can be the alternative to the rickshaw. “The metro rail will be very helpful to reduce people's dependence on rickshaws. The ridesharing companies’ services, especially motorbike one, is also an alternative to rickshaw, but we need adequate modern buses on the streets.”

DNCC Mayor Atiqul Islam said illegal rickshaws will be removed from the city streets in phases. “It’s a big challenge to get rid of rickshaws without arrangement of alternate transport, especially for school goers.”

Replying to a question, the mayor said the DNCC has already requested the school and college authorities under its jurisdiction to arrange transport for carrying their students.