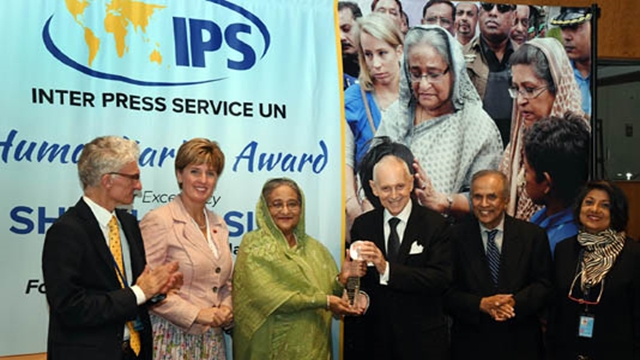 Prime Minister Sheikh Hasina has been conferred with the prestigious ‘International Achievement Award’ and the ‘2018 Special Distinction Award for Outstanding Leadership’ for her humanitarian and responsible policy in hosting the Rohingyas.

Inter Press Service (IPS), a global news agency, conferred the
‘International Achievement Award’ on her, while the Global Hope Coalition, a network of three not-for-profit foundations based in New York, Zurich and Hong Kong, honoured the prime minister with the ‘2018 Special Distinction Award for Outstanding Leadership’.

She received the ‘International Achievement Award’ from Director General of
International Organization for Migration Ambassador William Lucy Swing at a
high-level reception at the Conference Room 8 of the UN Headquarters here.

Under Secretary General of the UN Office of the Coordination of Humanitarian
Affairs Mark Lowcock and Canadian Minister for International Development
Marie-Claude Bibeau spoke at the function while Director-General of IPS
International Farhana Haque Rahman delivered the welcome address.

Receiving the awards, the prime minister said: “I dedicate this award to the
people of my country who have opened their hearts and houses to shelter 1.1
million traumatised forcibly displaced Myanmar nationals”.

On this very auspicious moment, the prime minister remembered Father of the
Nation Bangbandhu Sheikh Mujibur Rahman under whose visionary leadership
Bangladesh earned sovereignty and independence in 1971.

Sheikh Hasina said she believes that it is the duty of all responsible
nations to show humanity to the distressed and displaced people all around
the world.

“In our efforts to provide humanitarian assistance to the forcibly displaced
Rohingyas from our own resources, we allocated approximately US$ 5 million,”
she said.

Additional amount of roughly US$ 380 million is allocated for building homes
and fortify land, she said.

“We have to bear in mind that the causes of the crisis is rooted in Myanmar.
Hence, the solution is also to be found in Myanmar,” she said.

Sheikh Hasina put emphasis on creating a conducive environment in Myanmar for
ensuring safety, dignity, livelihood options and re-integration process for
the return of the Rohingyas to Myanmar.

“The international community has a clear obligation to collectively address
the source of the problem in Myanmar and engage effectively with its
government to prevent further exodus,” she said.

In addition, Sheikh Hasina said, the voluntary return of Rohingyas can only
be ensured with collective actions by the international community to ensure
prevention of repetition of atrocity crimes against ethnic and religious
minorities in Myanmar by establishing international, independent and
impartial mechanism to put accountability into effect.

During the Bangladesh’s nine-month Liberation War, the premier said, about
10 million people of Bangladesh took refuge in India. “I and my family became
internally displaced in Dhaka itself in 1971 during our Liberation War. I was
at that time expecting my first child who was born in captivity,” she said.

“I was also forced to stay out of the country for 6 long years as refugee
after my father, the Father of the Nation, Bangabandhu Sheikh Mujibur Rahman,
along with my mother, three brothers, the youngest one only a 10-year-old,
sisters-in-law, uncle, was brutally assassinated on 15 August in 1975. Who
else could better realise the pain and distress of a refugee,” she said.

The prime minister thanked the Inter Press Service for enormous contribution
to the field of journalism.

She expressed sincere gratitude to the Global Hope Coalition and its
Honorary President Ms Irina Bokova for recognising the efforts of her
government and the people of Bangladesh with this honour.

“Nonetheless, I wish I never had to stand here for the reason I am standing
here today. I wish the world never had to witness the worst form of violence
and atrocities that has been committed against the Rohingyas in Myanmar,” she
said.

The premier called upon the international community to keep up their pressure
on Myanmar and resolve the Rohingya crisis at the earliest.