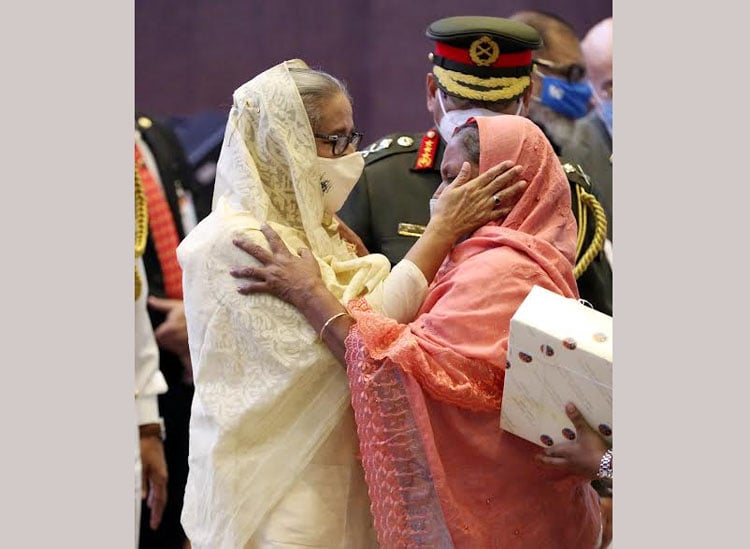 Prime Minister Sheikh Hasina on Monday said Awami League (AL) never forget the contribution of the freedom fighters, adding her government is building the country with the spirit and ideology of the War of Liberation.

"We never forget the contribution of the freedom fighters (FFs). And that is why we've taken initiative to build Bangladesh with the spirit and ideology of the War of Liberation," she said.

The premier said this while addressing a reception accorded to the gallantry award winning freedom fighters of the armed forces and their heirs, marking the Armed Forces Day-2022 at Dhaka Cantonment.

She said they are searching out the FFs who are in negligence and are taking all out measures to ensure their facilities such as FF allowance.

"It's our duty to work for those who had taken arms in their hands in reply to the clarion call of my father Bangabandhu Sheikh Mujibur Rahman to make the country independent," she added.

She continued that there might be different ideologies among the FFs, "but we didn't look down on their contribution and didn't show any negligence to them".

The head of government said, "We will remember your (FFs) contribution forever. We are working to preserve the memories of the War of Liberation".

She added that if the young generation knows the history of victory by seeing the memories of the War of Liberation, they will be inspired and will try to know how to work for the nation.

She also said the government is establishing Muktijoddha Complex in each Upazila and has also taken measures to preserve the historic Suhrawardy Udyan where the Father of the Nation had given historic March 7 speech, delivered directives to govern the country after the independence and where Pakistani occupation forces surrendered.

"So, any one will never disrespect the FFs. None will see the FFs and their families in the eyes of negligence in future," the premier added.

She also mentioned that her government has increased the allowance for FFs and it will continue from generation to generation.