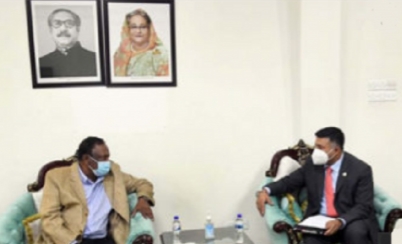 Bilateral trade between India and Bangladesh can be increased further, if necessary steps are taken to remove the existing trade bottlenecks, Commerce Minister Tipu Munshi said on Monday.

“India is a trusted friend of Bangladesh and deeper trade and economic ties are prevalent between the two countries. But there is still ample opportunity for enhancing the ongoing bilateral trade,” he remarked as Indian High Commissioner Vikram Doraiswami called on him at his office.

In particular, he put stress on bilateral discussion on removing non-tariff barriers and improving customs management at the borders to this end, says a commerce ministry release.

“But for this both the countries have to take initiatives to remove existing trade bottlenecks. The problems can be resolved peacefully, if addressed sincerely,” he told the Indian envoy.

The Bangladesh commerce minister repented that the existing problems could have been resolved much earlier through discussions, had there been necessary initiatives.

“New opportunity has come to restart the negotiation. I hope that the problems will go soon,” he expected.

In reply, Doraiswami admitted that there are some stumbling blocks in the way of enhancing bilateral trade ties between the two countries.

He also agreed with Tipu Munshi that the trade problems can be resolved through bilateral discussion.

He added that construction of a bridge at Ramgarh border has created a new scope for bilateral exports and imports.

“Trade activities can be started there with introduction of customs house and immigration system,” the Indian envoy said.

From this, people of the region, including Tripura, can benefit, he said, putting stress on taking necessary steps with regard to this.

From his country’s part, he assured of taking necessary initiatives to simplify customs formalities at the borders.

It is believed that Bangladesh’s exports to India will increase manifolds once the trade barriers are removed.