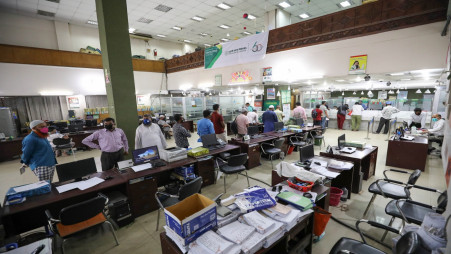 In the previous fiscal year (FY21) banks disbursed 77 percent of the target of CMSMEs loans. It means banks' CMSMEs loans disbursement was reduced by 4.15 percent in FY22.

Banks distributed these loans among 82,190 entrepreneurs in FY22. Among them, there were 73,642 male entrepreneurs while 14,617 were female.

In the second phase, state-owned banks disbursed loans of Tk 22.80 billion, which is 82 percent of the target.

Agrani Bank Limited has disbursed the highest loans among the state-owned banks. The bank had a target of Tk 8.90 billion. Against this, Agrani Bank has distributed Tk 11.13 billion, which is 125 per cent of the total target.

Sonali Bank disbursed loans of Tk 5.37 billion against the target of Tk 5.0 billion, which is 107 percent of the target.

Besides, the private sector AB Bank has disbursed 105 percent loans of the target. The target of the AB bank was Tk 2.40 billion and it disbursed Tk 2.53 billion.

Despite the effort of BB, banks failed to achieve the target in two consecutive years.

The CMSMEs borrowers alleged that banks harass the borrowers in the name of documents for lending.