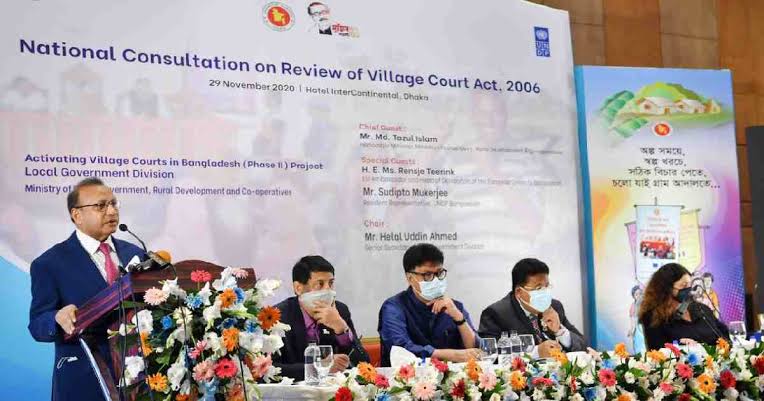 In order to make village courts more efficient, people-friendly and fitting for the modern age, the government has taken an initiative to amend the Village Court Act 2006.

With an aim to finalising the reforms and amendments to the legal infrastructure, an advisory meeting was organised at a city hotel with the support of the European Union and United Nations Development Programme (UNDP).

He mentioned that after the Village Court act was brought into effect in 2006, the first revision came in 2013, and in 2016 the ordinance was issued.

In light of the learning from the meeting along with field-level implementation, the LGRD minister hoped that the speakers’ opinions would help strengthen the justice delivery mechanism of village courts and significantly reduce the number of cases at district-level courts.

The Activating Village Courts in Bangladesh (AVCB) project took off in 2013 at 350 unions of 12 districts to ensure justice for the masses.

Building upon its huge success, phase-II of AVCB launched in 2016 at 1,080 unions of 128 Upazilas in 27 districts across eight divisions.

In his welcome remarks, National Project Director of AVCB-II Maran Kumar Chakraborty said: “The unprecedented success of village courts is reflected in its disposal of over two lakh cases, including over 10,000 cases transferred from the district courts. This is making a huge contribution to reducing pressure on the higher courts.”

Rensje Teerink said EU is a tried and tested partner in Bangladesh’s development.

“We hope the amendment to this act will not only ensure smoother operation at the village courts but also ensure justice for people,” she said.