Modi thanks Razzaque for giving nice company during Bangladesh visit 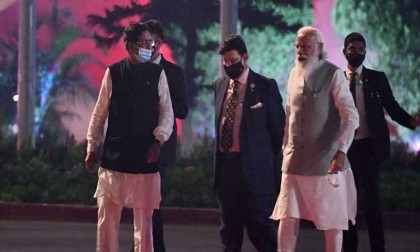 Indian Prime Minister Narendra Modi has extended thanks to Bangladesh Agriculture Minister Dr. Muhammad Abdur Razzaque for giving nice and caring company as the minister-in-waiting during the Indian premier’s visit to Bangladesh marking Bangabandhu’s birth centenary and golden jubilee of the country’s independence.

The Indian prime minister gave thanks in a letter recently, said a press release of the Agriculture Ministry Tuesday.

In the letter, Narendra Modi mentioned that Abdur Razzaque’s special attention to all the matters for successful implementation of the Indian’s premier’s short and busy schedule of visit to the places in Bangladesh has overwhelmed him.

“I saw the matter of your personal good term with local officers and leaders of the areas where I visited,” the Indian premier said.

Narendra Modi immensely lauded the agriculture minister’s sincerity and company during his visit.

He mentioned that the talks and exchanging of views were held with the agriculture minister on the issues which are very important for Bangladesh-India bilateral relations.

The Indian premier is pleased with holding the discussion and exchanging views with the agriculture minister, he said.

Indian Prime Minister Narendra Modi visited Bangladesh on March 26 and 27 on the occasion of the twin celebrations of birth centenary of Father of the Nation Bangabandhu Sheikh Mujibur Rahman and the country’s golden jubilee of independence.