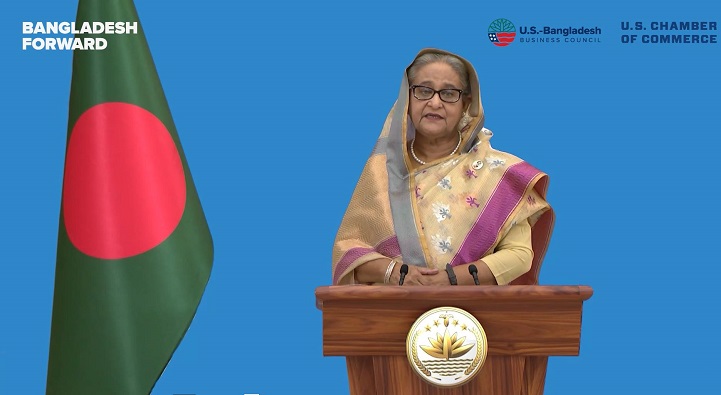 The U.S. Chamber of Commerce, in tandem with the Embassy of Bangladesh in Washington DC, on Tuesday launched the U.S.-Bangladesh Business Council, which will focus on advocacy and engagement to strengthen the bilateral commercial partnership.

The newly established Council will serve as a platform for business between Bangladesh and the U.S. to engage both countries’ governments and promote business opportunities to drive mutually beneficial economic growth.

“The United States has remained a strong partner in our journey towards democracy and development. It is important that both countries provide adequate policy support to further expand bilateral trade. We are constantly improving our physical, legal, and financial infrastructure to facilitate foreign investment,” said Prime Minister Sheikh Hasina.

“The United States is one of Bangladesh’s most important trading partners, and over the past decade, we’ve seen an impressive growth trajectory that we are confident will create new opportunities for the U.S. companies. Our launch of the U.S.-Bangladesh Business Council reflects the U.S. Chamber of Commerce’s commitment to advance efforts to deepen trade and investment ties between the two countries. We believe the Council will serve as the premier bridge between business and government leaders in both countries,” said Myron Brilliant, Executive Vice President and Head of International Affairs for the U.S. Chamber of Commerce. 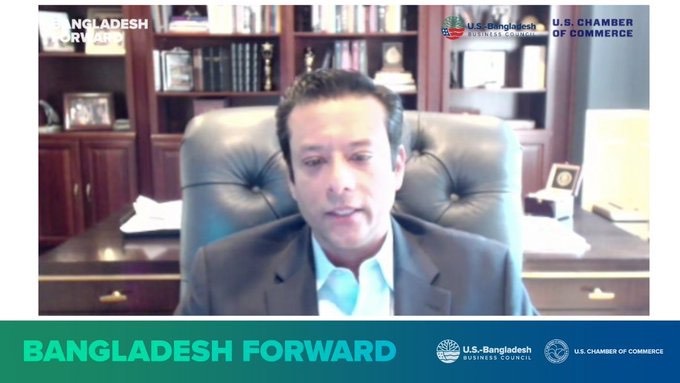 ICT Advisor Sajeeb wajed highlighted how Bangladesh became an ICT hub after the vision of ‘Digital Bangladesh’ was put forward in 2008.

He said that the South Korean tech giant Samsung started manufacturing its flagship smart device, Galaxy Note10+, in Bangladesh, which proves that Bangladesh has developed a rapidly growing IT-entrepreneurship sector.

“In 2008, we set a very ambitious agenda. One of those agendas was to achieve a middle-income country status by our 50th anniversary, which is this year. No one thought it possible, yet we have achieved it,” said the ICT Advisor.

“Under the leadership of Bangladesh Prime Minister Her Excellency Sheikh Hasina, Bangladesh has seen tremendous growth, and so too has its partnership with the United States,” said Biswal, who served as Assistant Secretary of State for South and Central Asian Affairs under President Barack Obama.

“The U.S.-Bangladesh business Council will work to strengthen trade and investment between our two countries, promote transparency, inclusion, and market-based reforms so that we can ensure that the coming decades continue to build prosperity and opportunity for the people of Bangladesh.”

The Council will be guided by a newly constituted U.S.-Bangladesh Business Council Board of Directors. 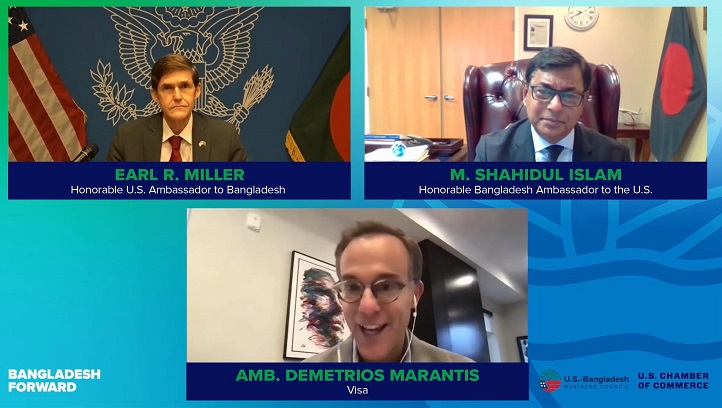 “The U.S.-Bangladesh Business Council is a reflection of the need for a dedicated platform to understand and partner with the Bangladesh of the Future,” said Jay R. Pryor, Vice President, Business Development for Chevron, and the Inaugural Chair of the Council’s Board of Directors.

Reflecting on Bangladesh’s growth, Pryor noted its future will be “one that is sustainable, helps Bangladesh reach its economic development goals and, by doing so, creates a business environment that empowers Bangladeshi women, enables small business growth, and strengthens communities through better access to healthcare, employment, and also energy.”

Ambassador M. Shahidul Islam thanked the Vice-President of the U.S. Chamber of Commerce, Nisa Biswal, for her instrumental role in forming the Business Council.

“We should look for a win-win formula for our private sectors. Bangladesh welcomes American investment in promising sectors like ICT, pharmaceuticals, agro-processing, ship-building, and the blue-economy, which could benefit the two sides,” said Ambassador Shahidul Islam.

The inauguration of the Business Council reflects Bangladesh’s strengthening of diplomatic ties with the U.S. on its 50th anniversary of independence and birth centenary of the Father of the Nation Bangabandhu Sheikh Mujibur Rahman.

Earlier in the morning, a private session was conducted by Salman F Rahman, Prime Minister's Adviser for Private Investment; and Dr. Ahmad Kaikaus, Principal Secretary to the Prime Minister.

They listened to various queries from US companies and instantly addressed issues related to trade and investment by the US companies.