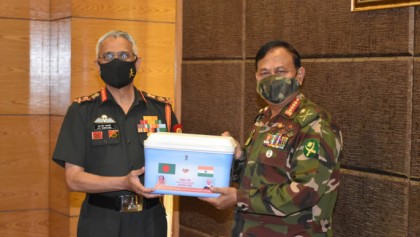 During the meeting, they exchanged greetings and discussed different issues of mutual cooperation in continuing existing good relations and future progress between the two country’s armed forces, an ISPR release said.

The Indian Chief of Army Staff handed over one lakh doses of Oxford-AstraZeneca vaccines to General Aziz Ahmed during the meeting.

Implementation of border road organization, imparting training to army aviators, exchanging of defence experts and trainings, mutual defence cooperation and other issues were stressed during the meeting.

He hoped that India will stay beside Bangladesh in resolving the Rohingya crisis in the same way.

Earlier, the Indian army chief paid tributes to memories of the members of the Bangladesh Armed Forces who made the supreme sacrifice during Bangladesh’s Liberation War in 1971 by laying wreath at the altar of Shikha Anirban in Dhaka Cantonment.

Later, a smartly-turned out contingent drawn from the Bangladesh Army gave a guard of honour to General Naravane at Senakunjo.

The Indian army chief arrived in Dhaka this morning on a five-day state visit at the invitation of his Bangladeshi counterpart General Aziz Ahmed.

General Naravane is accompanied by his spouse and a two-member delegation.

“The visit of the Indian Army Chief will further strengthen the close and fraternal ties existing between the Armed Forces of the two countries,” a press release of Indian High Commission in Dhaka said.

He is scheduled to visit various military stations and witness the culmination exercise, hardware display and closing ceremony of the joint military exercise Shantir Ogroshena.

The Indian Army Chief will share his experience at a seminar on United Nations Peace Support Operations.