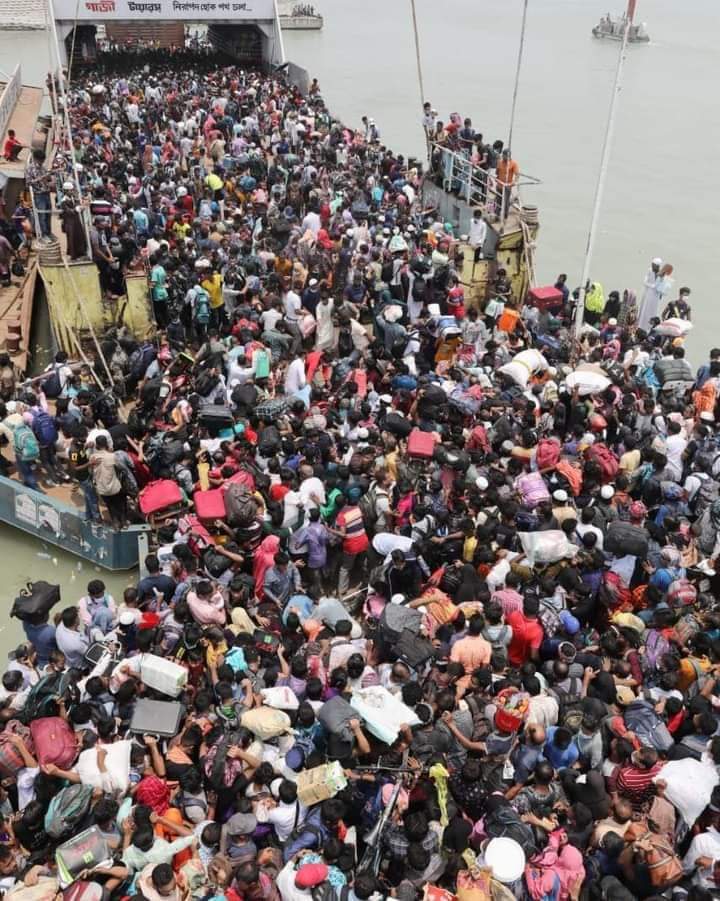 As the daytime ban on ferry services on Shimulia-Banglabazar and Paturia-Daulatdia routes has failed to stop the mad rush of homebound people, the government has lifted the restrictions.

The BIWTC kept the daytime ferry services suspended since Saturday morning. Some vehicles were, however, allowed to cross the river in case of emergency.

People thronged Shimulia and Paturia ferry ghats in their thousands for the last three days and the authorities were forced to operate ferries.

“Despite the risk of coronavirus transmission and the suspension of ferry services, people rushed towards the major ferry ghats to get home. They were not paying heed to any restriction,” Shafiqul said.

Although strict measures, including deployment of members of Border Guard Bangladesh (BGB), were in place, people, including women and children, were thronging these ferry ghats for crossing the Padma River.

They were crossing the mighty river in some jam-packed ferries ignoring health guidelines, including keeping a distance with others.

Under such a situation, the BIWTC resumed the ferry services on both the routes.

Meanwhile, people continued to leave the capital in droves to celebrate Eid-ul-Fitr with their near and dear ones defying government instructions to stay at their present locations.

As the long-route public transport services remained suspended, they were boarding small vehicles like private cars, microbuses and bikes, and even goods-laden trucks and pickups to reach their destinations.

Despite the suspension of the ferry movement and deployment of BGB, the rush of Eid holidaymakers increased at the Paturia and Shimulia ferry terminals since the morning.

Ferries assigned to take only emergency vehicles across the river were seen carrying private cars and commuters as well, disregarding the government’s travel restrictions.

Although several check-posts were set up at various points in the vicinity, commuters on auto-rickshaws, vans and motorbikes among other private vehicles reached these two terminals that are the major gateways to 21 southern districts.

Apart from ambulances and hearses, people and regular vehicles also commuted on the Paturia-Daulatdia route.

A total of 15 ferries operated on the Shimulia-Banglabazar route in the last 24 hours till 10:00am on Monday, said Shafiqul.

In another incident, police seized six trawlers and their operators for violating travel restrictions on the Shimulia-Banglabazar route by transporting passengers across the Padma River.

Despite the risk of coronavirus transmission and the travel restrictions, the trawlers tried to ferry passengers from Shimulia to Banglabazar, Kathalbari to Majhikandi, said Mawa River Police Inspector Sirajul Kabir.

Meanwhile, long tailbacks were created on different roads and highways, including Dhaka-Aricha, Dhaka-Chattogram and Dhaka-Tangail highways, due to the mad rush of homebound people ahead of Eid-ul-Fitr in violation of health protocols.

Police said the tailbacks were created due to heavy pressure of private vehicles alongside intra-district public transport.

Besides, many people were seen travelling on goods-laden trucks.

Some long-route passengers said they boarded local buses from Savar and their destination was Amin Bazar.

Later, they crossed the bridge on foot and boarded another bus from Gabtoli to reach their respective destinations.

However, people were seen paying no heed to maintaining precautionary measures.