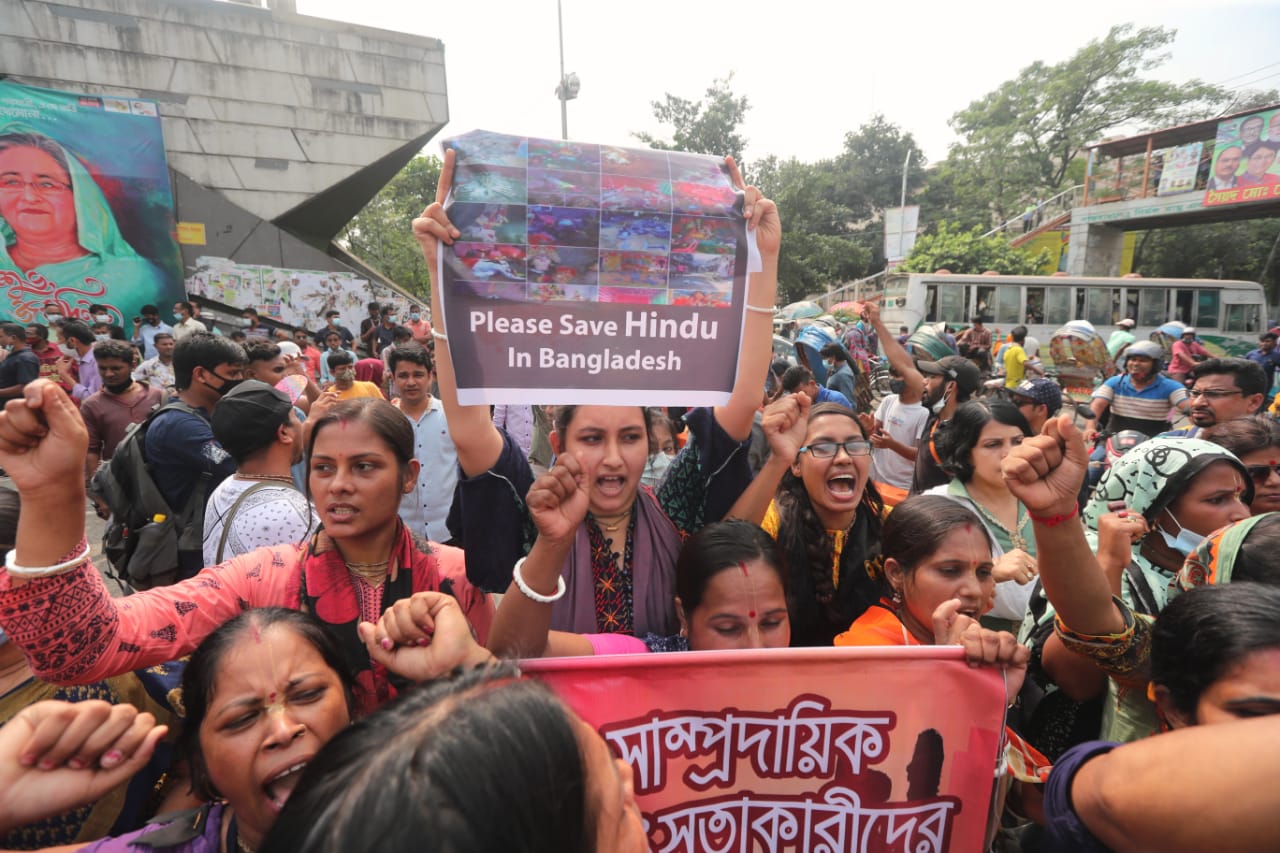 Bangladesh Hindu-Buddhist-Christian Oikya Parishad has staged a protest by blocking the Shahbagh intersection demanding speedy arrest and trial of those involved in communal attacks in different parts of the country including Comilla on Saturday.

The leaders and workers of the organization have ended “Hunger strike and Sit-in” program demanding eight points including the formation of a tribunal. A three-point program has also been announced.

In that time, various organizations took a stand in solidarity with them.

The eyewitness and protestors said that the hunger strike and sit-in program started around 6 am in-front of the National Museum as before announcement.

Later, a part of the protestor blocked the Shahbagh intersection road around 11am. That time crested a gridlock in intersection and make traffic jam, they said.

The protestor also said that the human rights activist Khushi Kabir broke the hunger strike of the protesters by drinking water around 12:30 pm. Later, the organizers marched towards the National Press Club with a protest procession.

Before concluding the 'hunger strike and sit-in program, the organization’s joint general secretary Monindra Kumar Nath made eight demands on behalf of the organization.

The demands are -- Formation of a judicial inquiry commission headed by a retired Supreme Court judge to investigate communal violence. In addition to all the temples, houses rebuilt, rehabilitated the homeless, proper compensation to the affected traders, medical treatment of the injured and each family who lost beloved should be paid a minimum of Tk 20 lakh or one member of each family should be given a job.

In spite of the clear instructions of the Prime Minister to prevent the attack, the administration, law enforcement agencies and people's representative’s member who have shown negligence in performing their duties have been identified and prompt punitive action has been taken.

Identifying communal instigators who spread the religious hate speech through the social media and bringing them under the Special Powers Act to ensure exemplary punishment.

Besides, the report containing the recommendations of the Sahabuddin Commission formed under the direction of the High Court to investigate the communal incidents organized from 2001-2006 will be made public immediately and necessary action will be taken accordingly.

Monindra Kumar Nath announced three programs at this time. These are -- marched towards the Prime Minister's Office from the remote areas of the country including Chittagong under the slogan ‘Let's go to Dhaka’ in support of the eight points on February next year.

Each organization of the religious-ethnic minority community will carry out public relations and protest programs separately and jointly for implementation of the eight demands.

Boycott of the Diwali festival in the Shyama Puja on November 4, observance of silence in the temple with tide black cloth in mouth from 6 pm to 6:15 pm and banners with anti-communal violence slogans on black cloth at the entrances of temples and mandapas.