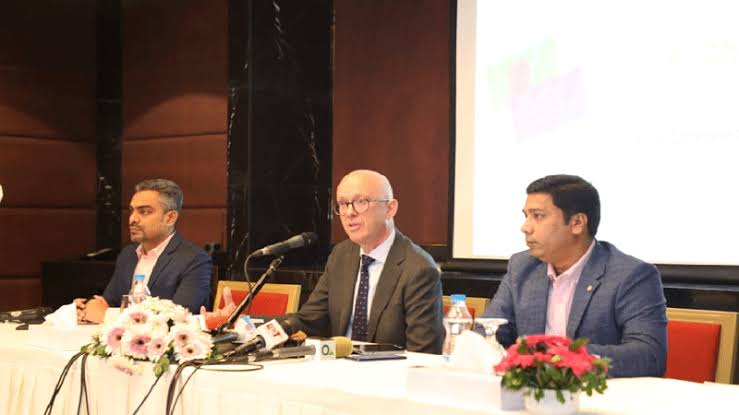 Ambassador and Head of Delegation of the European Union (EU) to Bangladesh Charles Whiteley on Monday said they will be following the next general election “very closely” because the international community is “very interested” in what happens in Bangladesh amid its growing engagement globally as a developing economic power house.

The Ambassador said everybody has a stake in what happens in that election in Bangladesh which is a strategic part of this region and a developing economic power house where ties are developing.

The EU envoy made the remarks while responding to a question at “DCAB Talk” held in a city hotel.

Ambassador Whiteley said the key word around elections is exactly the “process” and elections are not events.

He said the process involves long preparations and legislative framework; and noted that the next election is still two years away.

“I think the bottom line is in any election, average citizens wake up the day after the election and see the results and say my vote is counted,” said the EU diplomat.

He said election is a long process and it is the people of Bangladesh to exercise their right to vote and to decide accordingly at the time of election. “It’ll be a very important election and we’ll follow it very closely.”

Responding to a question on the Digital Security Act, Ambassador Whiteley referred to what they discussed at the EU-Bangladesh Diplomatic Consultations held in Brussels last month.

The EU raised the issue of the DSA, expressing concerns that some of its provisions risk going beyond the stated purpose of fighting digital crime and also inquired about certain ongoing trials in this context.

The EU encouraged Bangladesh to implement the recommendations made during the last Universal Periodic Review (UPR). The Bangladesh side provided updates and shared its perspectives in this regard.

“We’re also having a very open dialogue with the government which is important to respect and I think that will continue,” he said, adding that the issue will be featured in the next UPR.

The Ambassador said they have a very open and free discussion on human rights issues with the government and other stakeholders.

Responding to a question on the Rohingya issue, the Ambassador said they do have an arms embargo on Myanmar and stopped export of weapons that could be used to suppress the population. “We can’t stop the trade entirely. I don’t see any virtue in stopping proper investment with proper scrutiny.”

The arms embargo is currently in force until 30 April 2022. The EU put rounds of sanctions on Myanmar targeting dozens of individuals and economic entities.

In June, the European Union imposed sanctions on several senior officials and organizations in Myanmar over the military coup in February and the security crackdown that followed.

The EU imposed travel bans and asset freezes on 8 officials and froze the assets of 3 “economic entities” and the War Veterans Organization. Those targeted include ministers, deputy ministers and the attorney general, whom the EU blames for “undermining democracy and the rule of law, and for serious human rights violations.”

Referring to Prime Minister Sheikh Hasina’s visit to France, he said it demonstrates the richness of the relations with Europe.

On the GSP Plus issue, the Ambassador said this is not going to be a picnic in terms of the GSP plus rather it will be a difficult process.

“It’s very heartening that Bangladesh is already engaging in that,” he said, adding that it is very encouraging to see awareness in Bangladesh that it needs work and attention and it will not be easy.

The EU is very happy that the Everything but Arms (EBA) has helped Bangladesh and he thanked Bangladesh for the high quality clothing that they get from Bangladesh.

Bangladesh suggested an extension of the existing DFQF market access for Bangladesh in the European market by nine years beyond the three years of leeway after the graduation. Bangladesh can still enjoy the duty-free quota-free market access after 2026 up to 2029.