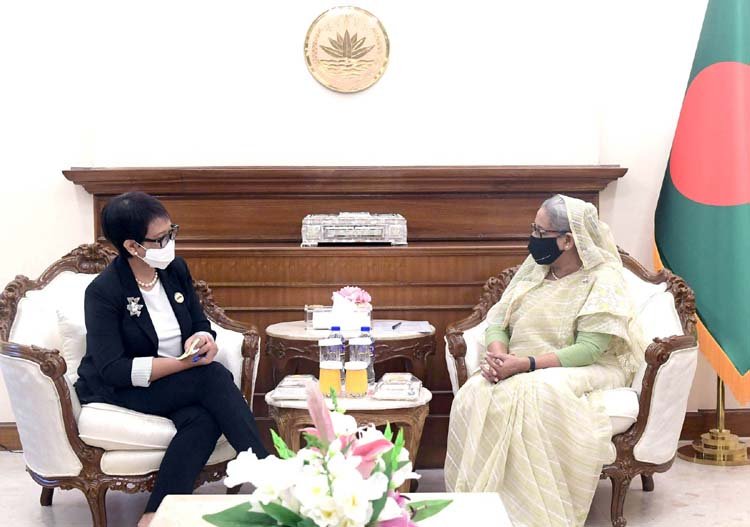 Indonesia vowed to offer strong message to Myanmar to repatriate its Rohingya nationals.

"We are going to send a strong message to Myanmar for resolving the Rohingya crisis," visiting Indonesian Foreign Minister Retno Marsudi said while paying a call on Prime Minister Sheikh Hasina at the Prime Minister's Office (PMO).

Sheikh Hasina said more than three years have elapsed, Bangladesh is looking after the forcibly displaced Rohingyas, saying, "It is a huge burden on Bangladesh."

Referring to the COVID-19 pandemic, he lauded Bangladesh for its success in tackling the pandemic successfully under the leadership of Prime Minister Sheikh Hasina.

The Indonesian minister, who has come to Dhaka to attend the 21th Indian Ocean Rim Association (IORA) Council of Ministers’ Meeting, said that they have also put the situation under control and they are strict to maintain health protocol.

The premier, during the meeting, said that the struggles of Nelson Mandela and Father of the Nation Bangabandhu Sheikh Mujibur Rahman were the same.

She mentioned that both the leaders had made tremendous sacrifice and both of them were jailed for a long time.

The South African Minister for International Relation and Cooperation said that South Africa is producing COVID-19 vaccines of Pfizer and Johnson and Johnson.

Sheikh Hasina mentioned about the micro-savings programmes of the government.

The Prime Minister also mentioned about the government’s steps to avoid any food scarcity in the country during the post pandemic situation.

“We have given special emphasis on food safety,” she said.