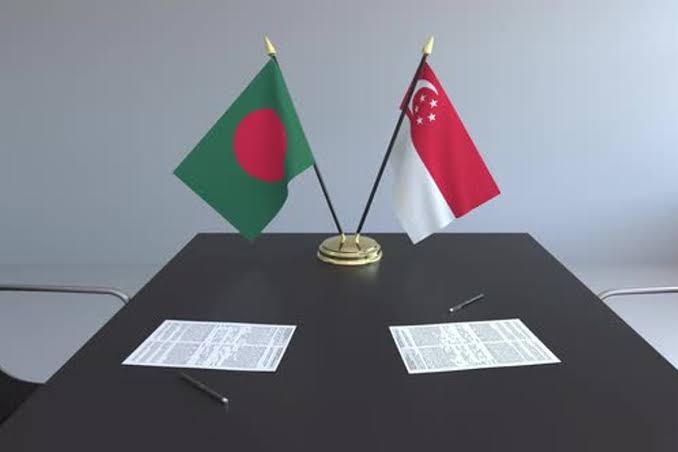 Bangladesh and Singapore will sign (FTA) for mutual benefit and enhancing the bilateral trade and investment.

During a telephone conversation on Thursday, the Foreign Ministers of Bangladesh and Singapore discussed the FTA issue and agreed to accelerate the process for concluding the free trade deal early.

Applauding the initiative for a Free Trade Agreement (FTA) between Bangladesh and Singapore, Momen pointed out that FTA would be mutually beneficial by further enhancing the bilateral trade and investment.

During the conversation, the Bangladesh Foreign Minister expressed satisfaction over the excellent bilateral relations existing between the two friendly countries, mentioning that Bangladesh considers Singapore as a role model of Economic Development.

The two Foreign Ministers agreed on the necessity of exploring synergies in new areas of cooperation for expanded bilateral engagement.

Praising Dr. Balakrishnan’s previous role as Minister-in-charge of the Smart Nation Initiative, Bangladesh Foreign Minister shared the rapid digital transformation of the economy and society in Bangladesh under the vision of Prime Minister Sheikh Hasina for a ‘Digital Bangladesh’.

In this connection, Momen sought Singaporean cooperation in the area of ICT and digitisation, to which Balakrishnan responded very positively and assured of full support and assistance.

While thanking the Government of Singapore for providing humanitarian assistance to the forcibly displaced Myanmar nationals sheltered in Bangladesh, Foreign Minister Momen sought Singapore’s and ASEAN’s proactive role in bringing a sustainable and permanent solution to the Rohingya crisis by ensuring their urgent return to their homeland in Myanmar.

Dr. Vivian assured that Singapore would remain engaged on the issue and of Singapore’s continued support for a durable solution of the crisis.

He further suggested that Singapore may consider employing more of skilled workers from Bangladesh especially in their health and other service sectors.

Referring to the 50 years of diplomatic ties between the two countries in 2022, both the Ministers agreed to celebrate the special occasion in a befitting manner in both the countries.

Momen invited his Singaporean counterpart to visit Bangladesh. Balakrishnan also extended an invitation to Dr. Momen for an official visit to Singapore to kick-start the celebration of the 50 years of diplomatic relations between the two countries.

Earlier, the two Foreign Ministers exchanged greetings of the New Year and discussed the pandemic situation in their respective countries.