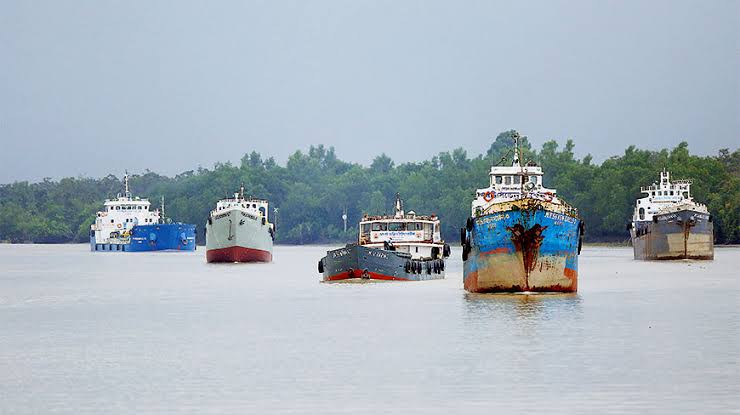 The Ministry of Shipping (MoS) backed the Tk 15.50-billion 'Pashur channel maintenance dredging project' as an 'electoral pledge' of the government and suggested that the Ministry of Finance (MoF) should provide Tk 13.95 billion as grant instead of loan, sources said.

"The dredging activity of Mongla port channel is not a commercial task, rather it is an electoral pledge of the present government," the MoS wrote in a recent letter to the MoF.

The issue surfaced after the MoF agreed to provide Tk 13.95 billion to the Mongla Port Authority (MPA) as loan, at 5.0 percent interest, with 20 years repayment period and five years grace period.

The MoF also said once the project is approved, the MPA would have to sign loan agreement with the ministry, where compensation terms would be mentioned.

MoF Additional Secretary Tahmid Hasnat Khan said on Monday that usually the government reviews the financial condition of its entities before deciding whether to provide grant or loan to a development project.

In the case of Mongla port's river channel dredging project, the decision was taken considering all these aspects.

"So far, none has contacted me again with further appeal," he added.

MPA Chairman Rear Admiral Mohammad Musa in a letter to the MoS on July 17 wrote that the project was listed in the annual development plan of fiscal year 2022-23 as an unapproved new project.

Implementation of the project is very much necessary for the Mongla port to maintain the water depth through capital dredging in its outer bar and inner bar.

"Otherwise the port channel will face navigability problem, and bringing even low-draft vessels wouldn't be possible."

In that situation earning of the port would fall drastically, which would lead to failure in paying salary, wages and pension to the employees, he further wrote.

According to Mr Musa, the port annually earns Tk 3.0 billion revenue from handling goods. From the port's handling activities the revenue board earns Tk 30-40 billion as duties and other taxes.

Infrastructural development of the port leads to increased use of its capacity. Thus, the revenue authority's earning from it also goes up.

The MPA chairman opined that unless the maintenance dredging is carried out, annual transportation of 4.5 million tonnes of coal for the Rampal power plant would be disrupted alongside interruption of export-import activities of the export processing zone and e-zone in Mongla area.

Mr Musa noted that the port can save Tk 50 million annually, from where small-scale infrastructural projects are implemented.

The port would not be able to pay back Tk 13.90 billion, if the government provides the amount as loan for the maintenance dredging project, he added.

Sources said the MoS in a letter to the MoF on Thursday mentioned that the present government in its 2018 electoral manifesto pledged to dredge 10,000-kilometre river routes in 10 years.

So, the MoF should revoke the previous order and provide Tk 13.90 billion as grant of the government to implement the maintenance dredging work.

Mongla is a small port whose majority of capacity remained unused, as shippers showed low interest to use it due to connectivity glitch.

However, inauguration of the Padma Bridge has brought the port closer to the capital city by cutting travel time. Now exporters are showing interest to use the port.