No condition for IMF loan to Bangladesh: PM tells Parliament 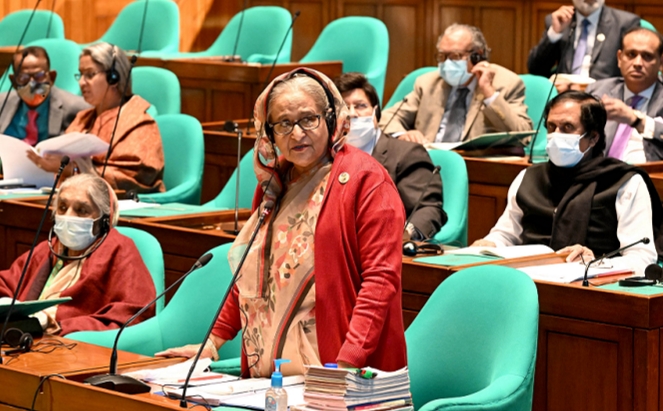 Prime Minister Sheikh Hasina on Wednesday told Parliament that the loan Bangladesh is taking from the International Monetary Fund (IMF) has no significant conditions attached with it.

“IMF provides loan to a country only when it has the capacity to repay the loan. We’re not taking loan (from IMF) with any conditions,” she said replying to an opposition lawmaker in the House.

Taking the floor on a point of order, Jatiya Party lawmaker Mujibul Haque Chunnu said Bangladesh is now meeting some conditions to get loan from IMF and already raised the electricity tariff and will increase gas price due to the loan and this will lead to soaring prices of commodities and inflation.

PM Hasina said the government is providing subsidy to power and gas. “My question is that which other country of the world provides subsidy to electricity and gas. We’ve increased the electricity generation and ensured electricity supply. But all will have to exercise austerity in using electricity,” she said.

She said the commodity prices have soared throughout the world. In Bangladesh, the government provided fair price card and TCB card for the lower and middle-income people so that they can purchase some essential commodities including rice at subsidized rates, she added.

The premier said, “We’re providing huge subsidy to agriculture. Now if we need to provide Tk 40,000-60,000 crore to electricity-gas generation and supply then how will we provide this?”

She said the inflation came down slightly in December and January last in the country. The food inflation is 13.3 percent in a country like England. The same situation prevails in all other countries of the world. But Bangladesh has not fallen into such situation yet, she added.

Sheikh Hasina said she clearly told the businesspeople that the government can provide uninterrupted gas supply to them, if they agree to pay the same rate what the government spends to procure gas from international market.

“If they want uninterrupted gas supply, they would have to pay the same price what the government needs to procure gas. There is no reason to provide subsidy here,” she said.