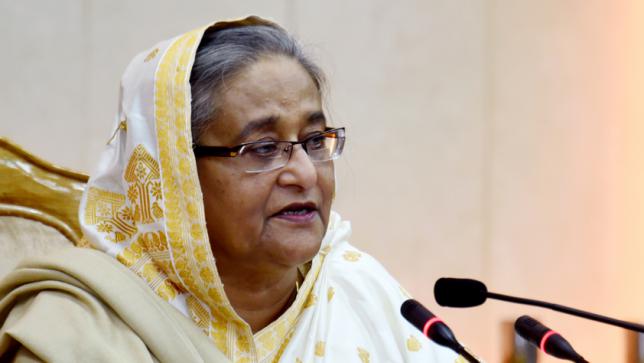 Prime Minister Sheikh Hasina on Tuesday asked insurance companies to give a special attention to their social responsibility instead of gluing their eyes only to profit.

"It’s urgently needed that the insurance industry is used for the welfare of humankind," she said while inaugurating the three-day 15th International Conference on Inclusive Insurance 'Coping with Climate Risk'.

Bangladesh Insurance Association (BIA) and the Munich Re Foundation in cooperation with the Microinsurance Network organised the conference at Pan Pacific Sonargaon Hotel in the city.

The Prime Minister asked the insurance companies to play a more effective role in keeping the production as well as the economy free from any risk. "We think life insurance can be utilised in facing natural calamities. This can play a special role," she said.

In Bangladesh, the use of life insurance in facing losses caused by natural disasters is very much insignificant, she said, expressing the hope that those involved in the insurance sector will play their due role so that people living in the venerable areas could live.

Sheikh Hasina said the government is constructing houses and cyclone shelters in the areas that are prone to natural calamities.

"We’re giving special attention to facing risks. If the insurance companies come forward and stand by the people, I think the people of our country will be pulled out from poverty and the country will be able to step towards overall development faster," she said.

Briefly describing government’s various programmes for the development of the insurance sector, the Prime Minister said the non-listed 27 insurance companies have been given time until December next to be enlisted in the capital market.

Hasina said a transaction of above Tk 10,000 must be made through a bank while all insurance companies have been instructed to show their updated insurance claims on their respective websites.

The Prime Minister said the process of Unified Messaging Platform (UMP) is underway to safeguard the customers from cheating while making transactions with insurance companies.

She termed the inadequacy of information as a major problem for insurance customers for which they remain in the dark about their deposits, saying the process of the UMP will be able to help overcome this problem.

Referring to the growing trend of constructing high-rise buildings with the country’s huge economic development, Hasina said initiatives have been taken to introduce building insurance to ensure the financial security against risks.

Mentioning extreme natural disasters like cyclone, storm, flood, drought, rain and earthquake which are common phenomena in various parts of the world, she said being the largest Delta in the world, Bangladesh is one of the most vulnerable nations to climate change.

Laying emphasis on launching a specially designed micro-insurance scheme to tackle the risk of climate change, the Prime Minister said low-income people affected by natural disasters will be benefited from such an initiative.

She mentioned that agriculture insurance is being introduced to reduce the financial losses of farmers being affected by the sudden floods in the ‘Haor’ region and tackle the risk of climate change as a whole.

Besides, an insurance policy has been introduced to bring under insurance about 12 million workers working abroad, she said, adding that a worker will get maximum insurance benefit of Tk 5 lakh.

She announced that the 'Bangabandhu Education Insurance' is underway to help continue the education of the school-going students in the absence of their parents.

Besides, she said, the proposal to declare March 1 as the 'National Insurance Day' is under consideration commemorating the day on which Bangabandhu Sheikh Mujibur Rahman had joined the then Alpha Insurance as its regional chief.

At the conference, around 450 experts from around the world are set to discuss and identify the ways of accelerating growth and economic viability in inclusive insurance for emerging markets.