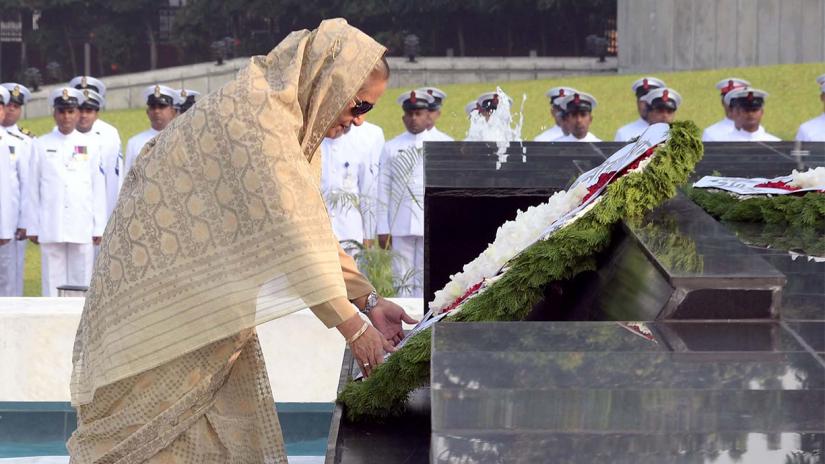 Prime Minister Sheikh Hasina today called upon
all not to pay heed to propaganda, saying that ill efforts are being made to
mislead the people through it (propaganda).

“We see sometimes that confusion is created by spreading propaganda. So I
would like to tell everybody not to pay heed to this propaganda,” she said.

The premier said various kinds of propaganda regarding onion,
salt, etc are publicised to confuse the people.

“I know that it will happen and it’s normal. But we will have to move by
facing it and we are moving in this way,” she said.

The prime minister said this while addressing a reception at the Army
Multipurpose Complex at Dhaka Cantonment this morning.

Her comments came as a vested quarter is now engaged in the country in
spreading various types of propaganda including price hike of essential
commodities like onion, salt and rice to misguide the people.

The prime minister accorded the reception to the successors of
Birshreshthos and other gallantry award-recipient freedom fighters of the
armed forces on the occasion of the Armed Forces Day-2019.

The prime minister said the production of fishes and vegetables has
increased manifold and the government is now giving special attention to food
and nutrition security.

“We’re providing 30 types of medicines to the people free of cost through
the community clinics. We’ve undertaken proper programmes to fulfill the
basic needs of the people and we’ll continue it,” she said.

Sheikh Hasina urged the freedom fighters to tell the story of the great
liberation war to their children, grandchildren and local people.

“We’re constructing Muktijoddha Complex in all upazilas so that the
evidence of the liberation war in the respective areas is not destroyed and
the children of the next generation could know the real history of the war,”
she said.

“Through it the sense of self dignity of the next generations will be built
and they will learn moving by keeping their heads high,” she added.

The prime minister said Bangladesh earned honour in the world through the
liberation war in 1971. “But after the assassination of Bangabandhu in 1975,
the country lost this honour and it was turned into a nation of killers, coup
and conspiracies,” she said.

Sheikh Hasina said 19 coups took place and many armed forces members were
killed and freedom fighters were brutally murdered and tortured at that time.

“The history of the liberation war was distorted and the name of the Father
of the Nation was also erased,” she said.

“But assuming office after 21 years, we were able to bring back the
glorious tales of the liberation war. We were also able to hold the trial of
the killers of Bangabandhu and war criminals,” she said.

The prime minister said she thinks that the people of Bangladesh were
enlightened afresh on the world stage by removing the dark cloud that gripped
the sky of the country after 1975.

“The honour that the country earned in 1971 was trampled by the dust in
1975. Now I can at least claim that Bangladesh is a country of honour before
the entire world,” she said.

The prime minister said as a dignified nation it has consolidated its
position in the world through massive development. “We’re taking Bangladesh
forward by holding the ideology of Bangabandhu in the hearts and following
his footsteps,” she said.

Sheikh Hasina reiterated her aim to build Bangladesh as a hunger and
poverty-free Sonar Bangla as dreamt by the Father of the Nation.

“Bangladesh has graduated to a developing country from a least developed
one and it’s our vow that we’ll surely materialise the dream of Bangabandhu
Insha Allah,” she said.

The prime minister said Bangladesh has earned independence in exchange for
blood of millions of martyrs, and their sacrifices cannot go in vain.

Sheikh Hasina also renewed her firm determination to do everything
necessary for the welfare of the freedom fighters and their successors.

“We’re pledge-bound to ensure welfare and socioeconomic prosperity of the
valiant freedom fighters. We’re working to establish their highest dignity
and honour as well as recognise their contributions to the war of
liberation,” she said.

The prime minister said her government is implementing massive programmes
to ensure welfare of the freedom fighters.

In this regard, she highlighted construction of Muktijoddha Complex in all
districts and upazilas of the country, preservation of places that carry the
memory of war and construction of liberation war museums.

Sheikh Hasina said the great task of safeguarding the country’s
independence and sovereignty has been vested in the armed forces.

Apart from performing this sacred responsibility, she said, the members of
the patriotic armed forces have been continuously extending necessary support
to various fields including combating natural disasters, constructing
infrastructures and maintaining law and order.

“That’s why, we’re implementing various welfare-oriented programmes for
the armed forces including modernisation as well as physical and
infrastructural development,” she said.

She expressed her firm belief that the armed forces will continue their
welfare-oriented programmes for the distressed and insolvent freedom fighters
and their family members.

At the outset of her speech, Sheikh Hasina extended her heartfelt
greetings and congratulations to all members of the armed forces on the
occasion of the Armed Forces Day.

She said on this historic day, the fearless armed forces members and mass
people of the country launched a coordinated attack together against the
Pakistani occupation forces.

“As a result our victory was sped up and we earned independent and
sovereign Bangladesh,” she said.

Earlier, the prime minister presented honorarium cheques and gifts to the
successors of seven Birshreshthos as well as other gallantry award-recipient
freedom fighters.

As many as 101 gallantry-award recipient freedom fighters and their heirs
including close relatives of seven Birshreshthos joined the function.