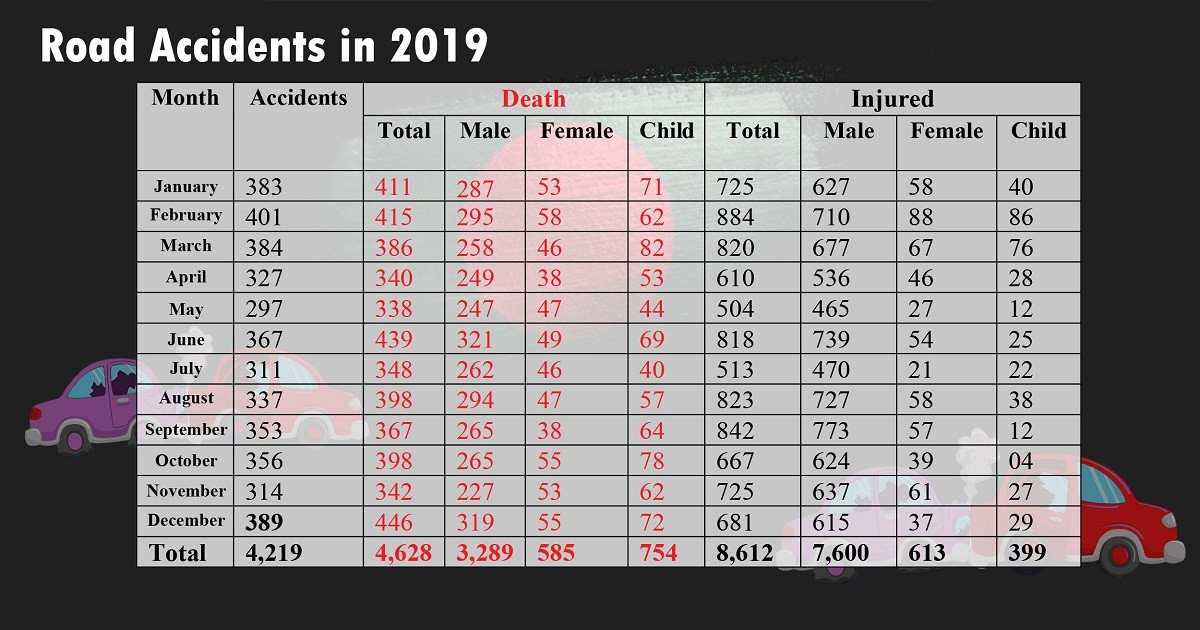 Although there was a decline in the number of road accidents, the country saw more deaths on roads in the immediate-past year of 2019 compared to 2018.

The journalists’ platform identified some reasons for reduction in the number of road accidents across the country last year.

According to the report, 411 people, including 53 women and 71 children, lost their lives and 725 others received injuries in 383 accidents in January last year while around 401 accidents took place in February when 415 people were killed and 884 others injured. Of the deceased, 58 were women and 62 children.

In March, around 386 people, including 46 women and 82 children, were killed and 820 others injured in 384 road accidents and some 327 accidents took place in April that claimed the lives of 340 people and left 610 others injured. The deceased include 38 were women and 53 children.

In May, 338 people, including 47 women and 44 children, were killed and 504 others injured in 297 accidents, while at least 367 road accidents took place in June claiming the lives of 439 people and leaving 818 others injured. Among the deceased, 49 were women and 69 children.

Some 311 road accidents happened in July when 348 people, including 46 women and 40 children, were killed and 513 others received injuries.

A total of 367 road accidents took place in September claiming the lives of 367 people and leaving 828 others injured. The deceased include 38 women and 64 children.

SCRF President Ashis Kumar Dey said the majority of the fatal road accidents took place due to whimsical driving and lack of carefulness of drivers of heavy vehicles like buses and trucks.

There was also lack of proper monitoring and supervision by authorities concerned in this regard, he added.

The SCRF observation also said an increase in the number of small and local mechanised vehicles on regional roads and inter-district roads and highways, extortion in several spots, including all bus and truck terminals, displeasure of transport workers and overall anarchy in the road transport sector were the other reasons behind road accidents.