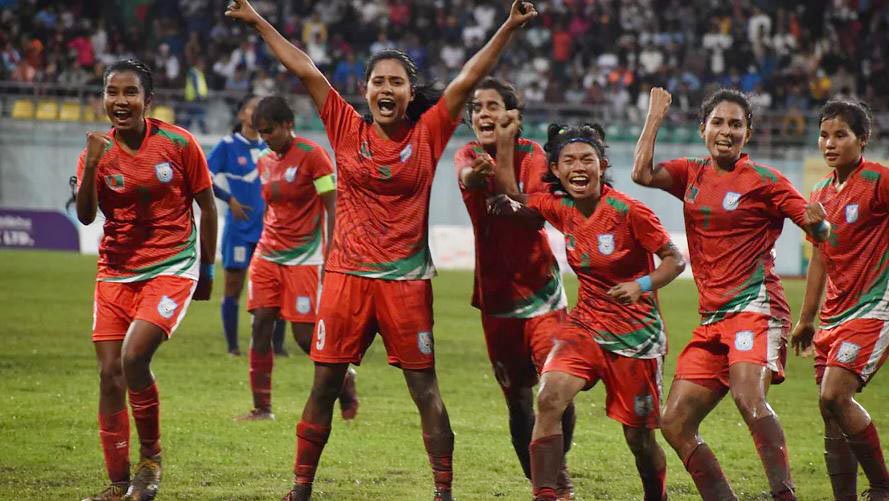 Bangladesh women’s national football team made new history as they clinched their maiden SAFF Women’s Championship title with a 3-1 victory over Nepal in an entertaining final at Dasharath Stadium in Kathmandu, Nepal on Monday.

The women in red and green also fulfilled a football-mad country’s most desired dream of this prestigious South Asian title after 19 years. The nation for the first and last time saw its men’s national team clinch this title in Dhaka in 2003.

Last year, the men’s team were expecting to enter the final of SAFF Championship after 16-year, but their counterpart Nepal shattered their dream after playing a 1-1 draw.

However, the women in red and green not only clinched the title, also paid all dues to this neighbouring Himalayan nation who have been playing a vital role to break Bangladeshi football fans for a long time.

Bangladesh women also touched a milestone as they got their first ever victory over Nepal women after their seven encounters in different international competitions including AFC Women’s Olympic Qualifying Tournament and SAFF Women’s Championships.

Nepal beat Bangladesh five times out of the last seven matches while two matches ended in draws. They beat the women in red and green by 1-0 in the two-match series last year’s September. They won the first match by 2-1 goals while the second match ended in a goalless draw.

On Monday, forward Krishna Rani Sarker scored a brace and substitute forward Shamsunnahar (Jr) added one for Bangladesh while forward Anita Basnet reduced the gap for Nepal in the day’s historical final.

The match was very important for both finalists as none of these two teams had been able to clinch this title in the last five editions.

Bangladesh appeared on the field with their full strength and unchanged eleven but got an early blow as their key player forward Sirat Jahan Shopna left the ground due to injury concerns within the 10-minute of the game.

Shamsunnahar (Jr) came as a substitute in her place, but this substitution soon proved a blessing for Bangladesh because this super-sub Shamsunnahar (Jr) brought the first breakthrough for the team within the next two minutes.

Shamsunnahar (Jr) put the ball home with a right footer, off a cross by midfielder Monika Chakma from the right flank of the box in the 13th minute (1-0).

Bangladesh, which started with 4-4-2 formation, paid their full attention to their defense after the 1-0 lead. The hosts, which were motivated and inspired by their crowd, started to press Bangladesh, but failed to get any result.

By this time, Bangladesh goalkeeper Rupna Chakma and defenders also proved their worth as they denied several counterattacks and set pieces from their opponents which was successfully maintained until the final whistle.

The women in red and green got a big relief when another forward Krishna made it 2-0 with her left-footed shot utilizing a defensive error nearer the box in the 42nd minute.

After half time, the hosts tried hard to reduce the gap and finally forward Anita Basnet made it 2-1 with a right-footed grounder shot from inside the box in the 70th minute.

But within 7-minute, forward Krishna appeared as the savior for Bangladesh and sealed the fate of the match with her second goal from a through ball in the 77th minute (3-1).

Krishna, who broke Nepal's dream, shared the second spot on the competition's scorers list along with her compatriot Shopna, Indian player Anju Tamang and Pakistani player Nadia Khan With four-goal each.

While Bangladesh captain Sabina Khatun consolidated the top slot of this list with her 8 goals.

The women’s red and green also maintained their unbeaten run in this competition. They beat Maldives, Pakistan and India convincingly by 3-0, 6-0 and 3-0 goals in group matches and Bhutan by 8-0 goals in the semifinals on their way to the final.

Nation overflows with joy after women’s success in SAFF