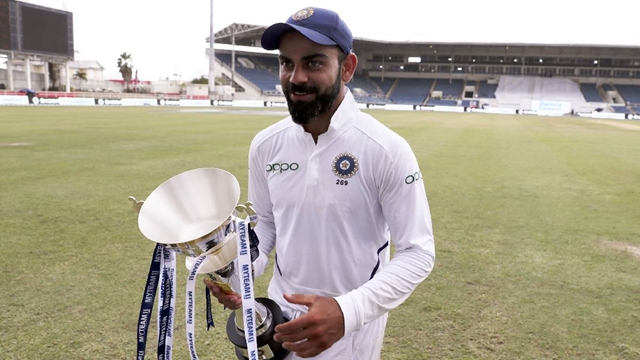 India's bowlers took five wickets in just over an hour on Monday to help complete a 257-run win over West Indies and clinch a 2-0 test series victory.

Set a formidable target of 468 runs, the host side could only manage 210 in 59.5 overs as the match ended well inside the fourth day at Sabina Park.

Sharmarh Brooks and Jermaine Blackwood put on 61 runs for the fifth wicket but India's bowling quartet of Ishant Sharma, Mohammed Shami, Jasprit Bumrah and Ravindra Jadeja made quick work of most of the rest of the batting lineup.

India declared its second innings at 168-4 on Sunday. India captain Virat Kohli had declined to enforce the follow-on after dismissing West Indies for 117 in its first innings — 299 runs behind India.

On Saturday, Bumrah took 6-16 and became only the third Indian bowler to post a test hat trick.

India won the first test by 318 runs, its biggest away win by runs in test cricket.

The win in the second test Monday was Kohli's 28th victory from 47 tests as India captain, surpassing M.S. Dhoni's record for test wins in charge of the national team.

India batsman Hanuma Vihari was the top scorer in the series with 289 runs, including a century and two half-centuries.

"Hanuma was the standout batsman," Kohli told Press Trust of India. "He is someone who is sure of his game and it shows. The dressing room feels calm when he's batting. That's a quality he possesses naturally."

Kohli said his side's bowlers were the key.

"It's a by-product of the quality team we have here, if we didn't have the bowlers we have, these results wouldn't have been possible.

"If you see these guys running in — Shami's spell today, Bumrah  ... Ishant bowling his heart out, Jadeja bowling a long spell. Captaincy is just a 'C' in front of your name. It's the collective effort that matters."

"Obviously we are disappointed, we didn't play a complete game of cricket in both the games," Holder said. "The bowlers (were) on the field every single day of this test series ... and at no point have they dropped their heads."