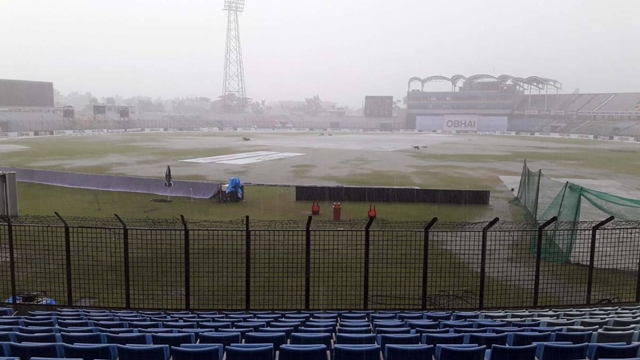 Persistent rain delayed the start of the fifth and final day of Chattogram Test between Bangladesh and Afghanistan.

Bangladesh need to score 262 runs to seal this game with only four wickets in hand. Afghanistan, on the other hand, need to scalp the last four wickets of Bangladesh to register a historic win.

In the first innings of the game, Afghanistan posted 342 riding on the maiden Test ton of Rahmat Shah and Asghar Afghan’s 92.

In reply, Bangladesh tumbled for 205 and handed Afghanistan a lead of 137 runs just at the end of first innings of each team. Rashid Khan bagged five wickets to bundle out Bangladesh while Mohammad Nabi took three wickets.

In their second innings, Afghanistan posted 260 relying on the fifties of Ibrahim Zadran and Asghar Afghan. Shakib took three while Taijul, Mehidy Hasan Miraz and Nayeem bagged two wickets each.

Afghanistan stretched its lead to 397 and set a challenging target of 398 to chase down for the Tigers.