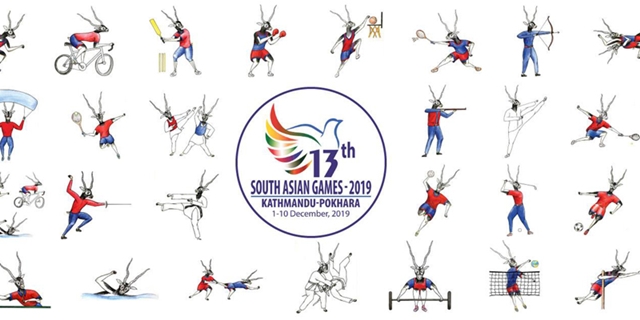 The 13th South Asian Games, the seven-nation biggest sports extravaganza of the region, begins on Sunday at Dasharath Rangasala Stadium in the Nepalese capital of Kathmandu through a gala opening ceremony.

Nepalese Prime Minister KP Sharma Oli will address the three-and-half-hour inaugural ceremony of the South Asian Games scheduled to be held from December 1-10 at capital Kathmandu, tourist town of Pokhara and Janakpur.

Swimmer Mahfuza Khatun Shila, who won two gold medals in the 12th SA Games in Guwahati, India held in 2016, will bear the national flag of Bangladesh in the opening ceremony of the ensuing SA Games.

Nepalese capital Kathmandu will host 19 disciplines of sports while Pokhara nine and Janakpur will hold one discipline - wrestling - during the 10-day event to be participated by hosts Nepal, India, Bangladesh, Pakistan, the Maldives, Bhutan and Sri Lanka.

A total of 3,252 athletes from seven South Asian nations will vie for 324 gold medals, 324 silver medals and 487 bronze medals.

A 621-member contingent will represent Bangladesh in the South Asian Games with a hope to clinch more gold medals than the previous occasions.

Bangladeshis will take part in 25 disciplines of sports, out of total 26.

The Bangladesh contingent, except football and cricket teams, trained intensively at home and aboard under BOA from July 15, and the country has good chances in archery, shooting, cricket, football apart from judo, karate and wushu.

Host Nepal is the only country participating in all the 26 disciplines of sports while all the seven countries will play only athletics, badminton, basketball and shooting.

Similarly, every country except the Maldives will be participating in boxing, while giants India and Pakistan will not play cricket. The only team not to take part in football is Pakistan.

After Nepal, Sri Lanka and Bangladesh are the highest participating teams in the games with 25 sports each. Likewise, Pakistan follows Bangladesh on 18 games, India on 17 and Bhutan on 14. The Maldives will play the least games with only 11.

Bangladesh Women's Cricket team left Dhaka for the Nepalese town of Pokhara on Friday (November 29) while men's cricket team will fly for Kathmandu on December 1.

In the last SA Games in India in 2016, Bangladesh clinched four gold, 15 silver and 56 bronze medals with swimmer Shila winning two gold medals and shooter Shakil Ahmed and lifter Mabia Akhter one each.