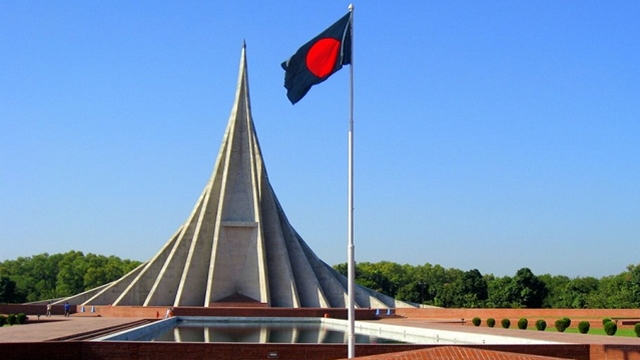 This year the day was celebrated amid much enthusiasm, fanfare and pride as the United Nations Educational, Scientific and Cultural Organization (UNESCO) recognized the landmark March 7 speech of Bangabandhu as a world documentary heritage.

The country has also attained a milestone progress in socio-economic development as the Committee for Development Policy (CDP) of the United Nations on March 15 officially declared the Bangladesh achievement of getting eligibility for graduating to a developing nation from the Least Development Countries (LDCs).

The day's programmes began early this morning with paying glowing tributes to the Liberation War martyrs and veterans at the National Memorial at Savar - the main venue for the celebration of the day.

The national flag was hoisted atop all government and private buildings while city streets and important intersections have been decorated with national and multi-colored miniature flags and festoons.

Important buildings and establishments as well as city streets and islands have also been illuminated with the light of red and green - the colour of the national flag.

After placing the wreaths, the President and the Prime Minister stood in solemn silence for some times as a mark of profound respect to the memories of the martyrs of the Great War.

A smartly turned-out contingent drawn from Bangladesh Army, Navy and Air Force presented a state salute on the occasion while the bugles played the last post.

Later, flanked by senior leaders of the party, Sheikh Hasina, also the president of Bangladesh Awami League, laid another wreath at the National Memorial on behalf of her party.

Families of Bir Shreshthas, war wounded freedom fighters, members of the diplomatic corps, leaders of different political parties, social, cultural and professional bodies and people from all walks of life also placed wreaths at the national memorial in the morning.

On her return from the National Memorial at Savar, the prime minister paid homage to Bangabandhu by placing a wreath at his portrait in front of Bangabandhu Memorial Museum at the city's Dhanmondi road number-32.

Flanked by central leaders of the party, Sheikh Hasina, also the president of Bangladesh Awami League, laid another wreath at the portrait of Bangabandhu on behalf of her party.

Prime Minister Sheikh Hasina also greeted all freedom fighters of the country on the day.

Like other occasions, the premier sent flowers, fruits and sweetmeats to the war-wounded freedom fighters (FFs) and members of the martyred families at Martyred and War-wounded Freedom Fighters' Rehabilitation Centre (Muktijoddha Tower-1) on Gaznavi Road at Mohammadpur in the city as a mark of her good wishes for them.

Ruling Awami League and different other political parties as well as socio- cultural and professional organisations have drawn up elaborate programmes to observe the day in a befitting manner.

The day was also celebrated at all divisional cities, district towns, upazila, municipalities and unions.

Programmes have also been organised at Bangladesh missions abroad on the occasion of the day while the expatriate Bangladeshis across the world are celebrated the Day by arranging different programmes.

Later on the day, special prayers were offered at all mosques, temples, churches and other places of worship across the country seeking divine blessings for the eternal peace of the departed souls of Bangabandhu, four national leaders, Liberation War martyrs and other patriots who embraced martyrdom for the country.

Improved diets were served to the inmates of hospitals, jails, old homes and other public institutions to mark the day.

On this day in 1971, Father of the Nation Bangabandhu Sheikh Mujibur Rahman proclaimed Bangladesh's independence following Pakistani occupation forces' crackdown on the unarmed innocent Bangalees on the black night of March 25. The nation launched the War of Liberation at the call of Bangabandhu soon after the proclamation of Bangabandhu was made and brought independence for Bangladesh on December 16, 1971 after a nine-month bloodstained battle against Pakistani forces.

Pakistani forces unleashed genocide on unarmed Bangalees killing three million innocent Bangalees, perpetrating atrocities on 200,000 Bangalee women and burnt down thousands of houses across the country during the nine-month war.