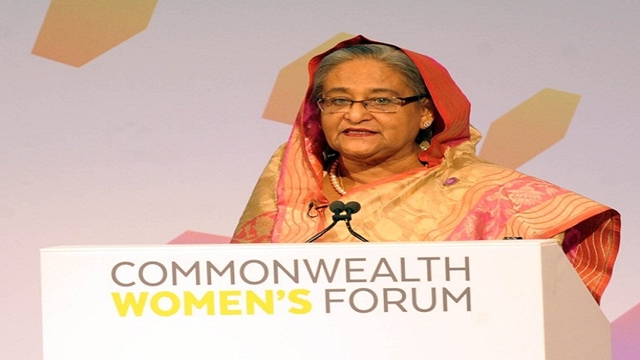 Bangladesh Prime Minister Sheikh Hasina underlined the need for women’s empowerment to build a peaceful and prosperous society during a speech to the 25th Commonwealth Heads of Government meeting in the UK on Tuesday.

“We want to build a future where world peace and women empowerment remain the cornerstone to create a society free from poverty, discrimination and conflict,” the premier told a Commonwealth Women’s Forum event at the Queen Elizabeth II Conference Centre in London.

Hasina was delivering the keynote speech at a discussion titled “Educate to empower: Making equitable and quality primary and secondary education a reality for girls across the Commonwealth.”

“We foresee a future where women and men work hand in hand for human development,” she said. “Ensuring quality education for girls and boys by 2030 is a priority for my government.”

The prime minister said universal education was key to Bangladesh achieving the overarching policy visions of inclusive development within the guiding norm of the United Nations Sustainable Development Goals (SDGs).

“Girls’ education is important for my government as it helps to eliminate various social injustices, especially for rural women,” she said. “Incidents of exploitation and domestic abuses have gone down substantially following the development in female education sector.”

The prime minister said the Constitution of Bangladesh, framed under the leadership of Father of the Nation Bangabandhu Sheikh Mujibur Rahman, recognizes the principles of gender equality and non-discrimination as fundamental rights.

“Bangladesh is now leading the way for gender equality in South Asia,” Hasina said, citing Bangladesh’s rise to the top of the World Economic Forum rankings for the region.

The prime minister added that the WEF also ranked Bangladesh 7th among 155 countries in terms of political empowerment of women.

“That is why the government adopted a progressive National Women Development Policy in 2011, while all national policies ensured participation and empowerment of women as an integral objective,” she said.

Hasina said the National Education Policy 2010 of Bangladesh puts the emphasis on education that promotes economic productivity and social and humane qualities.

“Without proper education, it’s not possible to empower women,” the prime minister said.