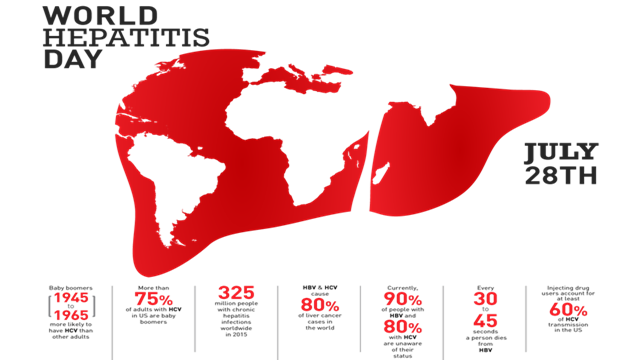 World Hepatitis Day 2018 is being observed today (Saturday) in Bangladesh and elsewhere in the world for raising awareness against the deadly virus.

The theme for this year is “Eliminate Hepatitis”.

Ascertained by the World Health Organisation (WHO), World Hepatitis Day takes place every year on 28 July, with the aim of bringing the world together under one single theme in order to raise awareness of viral hepatitis and the impact it has worldwide.

According to the United European Gastroenterology (UEG), Hepatitis B virus and hepatitis C virus are the leading cause of liver cancer in the world, yet more than 80 percent of those affected with viral hepatitis are unaware of their status.

President M Abdul Hamid and Prime Minister Sheikh Hasina in separate messages appreciated the observance of the day in Bangladesh.

President Abdul Hamid, in his message, said the number of people affected by the two viruses is increasing due to the lack of knowledge about the diseases.

“Especially, the main reasons behind the disease are using the same syringe again and again for drugs and unsafe blood circulation,” he said.

Hepatitis can be eliminated through creating mass awareness, said the president in the statement adding that this year’s theme “Eliminate Hepatitis” is a timely one for this regard.

In her message, Prime Minister Sheikh Hasina said the number of patients affected by Hepatitis B and C are increasing day by day in Bangladesh as well as in the entire world, especially in Asia and Pacific region.

The government has been implementing various programmes to create awareness among mass people and to ensure necessary medical facilities to prevent and cure the diseases, she said.

There are 325 million people that are living with viral hepatitis in the world, yet up to 290 million of these are unaware that they have it, said UEG.

There are many effective vaccines and treatments available for hepatitis B and C and eliminating viral hepatitis is highly achievable.