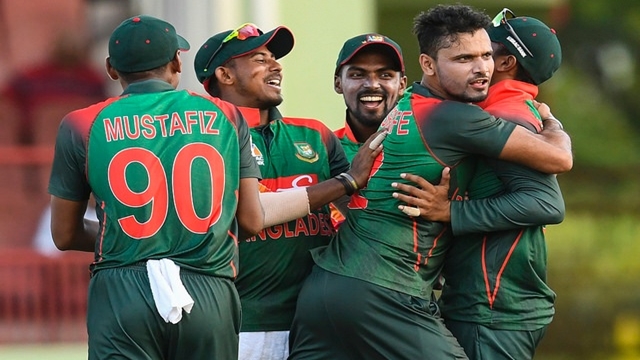 Opener Tamim Iqbal scored another century and Bangladesh successfully defended 301 runs to beat the West Indies by 18 runs and win their one-day international series 2-1 on Saturday.

After a good start by openers Chris Gayle and Evin Lewis, the West Indies run rate slowed in the middle overs. Despite a fillip by Rovman Powell of 74 off 41 balls, the home side still fell short on 283-6.

After being crushed in the test series, Bangladesh won the ODI series, its first away from home in nine years.

Tamim was quiet in the tests but loud in the ODIs, where he scored 130 not out in the first and 54 in the second. He raised his 11th ODI century in the 38th over with a single to long off and was out in the next over when a mistimed slog dropped at square leg.

His innings allowed Mahmudullah and captain Mashrafe Mortaza to take a swipe at West Indies.

Mortaza hit 36 off 25 balls, and Mahmudullah powered Bangladesh past 250 and 300 for their highest ODI score against the West Indies.

The 2-1 series win comes on the back of an ordinary Test series, but the visitors once again showed that ODIs remain their preferred format.

It is also Bangladesh's first ODI series win in West Indies, and the second such win overall against the opposition. West Indies though remain without a series win for four years now, and much of the defeat fell at their feet in Basseterre.