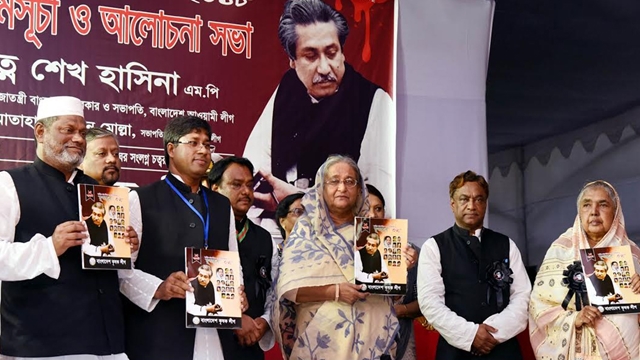 Prime Minister Sheikh Hasina has strongly postulated military dictator Ziaur Rahman’s involvement in the assassination of Bangladesh’s founding father and regretted for being unable to bring him to justice.

“Zia’s consequence was inevitable (for the murder) and my greatest regret is that he couldn’t be tried for the assassination” as he himself was killed in a 1981 military coup, she told a discussion on Wednesday to mark the beginning of the month of mourning.

On Aug 15 in 1975, the then President Bangabandhu Sheikh Mujibur Rahman was assassinated along with most members of his family by a group of disgruntled army officers at his Dhanmondi residence.

Bangabandhu’s daughters Hasina and Rehana escaped the massacre as they were in Europe.

Speaking at the Bangladesh Krishak League-organised discussion at Bangabandgu Memorial Museum premises, Hasina said Zia usurped power following the carnage and rewarded the self-confessed killers with diplomatic assignments abroad “as he was involved in the murder”.

The anti-Liberation forces were behind the killings to avenge their defeat in the 1971 war.

“They thought an independent Bangladesh will no more exist after the death of its founding father,” she said.

The masterminds of the assassination belonged to those who reluctantly or incidentally joined the war without having any belief in the spirit of independence, said the ruling Awami League president.

“The elements who couldn’t accept the defeat of the Pakistani occupation forces as their cohorts and unleashed atrocities on the Banglaees by forming Al Badar and Al Shams were (also) involved in the assassination,” she said.