Hasina-Modi agree to work together for peoples benefits 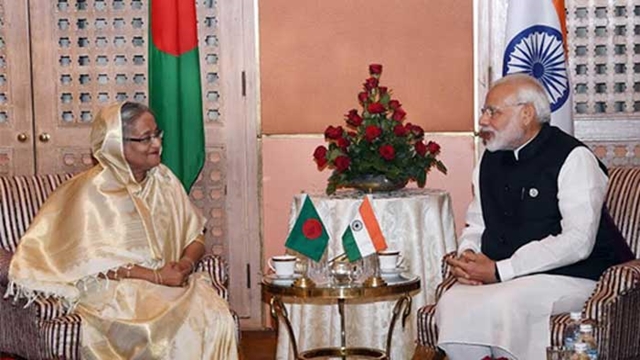 Bangladesh and India today agreed to continue their joint endevours to better the lives of their two peoples as Prime Minister Sheikh Hasina held talks with her counterpart Narendra Modi on the sidelines of the 4th BIMSTEC Summit.

“The two premiers said they want to carry on their joint endevours for changing the fate of the people of the two countries,” Bangladesh Prime Minister’s Press Secretary Ihsanul Karim told a media briefing after the talks at Kathmandu’s Hotel Soaltee Crowne Plaza this afternoon, reports BSS.

The meeting took place after the opening session of the 4th Summit of the Bay of Bengal Initiative for Multi-Sectoral Technical and Economic Cooperation (BIMSTEC).

Karim said the Bangladesh prime minister expressed gratitude to India for its support to Bangladesh’s liberation war and as well as development of the country.

“We want to carry forward this friendship to a new height,” she said.

The two leaders, the press secretary said, expressed optimism about the future of the seven-nation BIMSTEC.

“Both the premier’s said they want to continue the mutual cooperation which they expected will benefit the other BIMSTEC member nations as well,” the press secretary said.