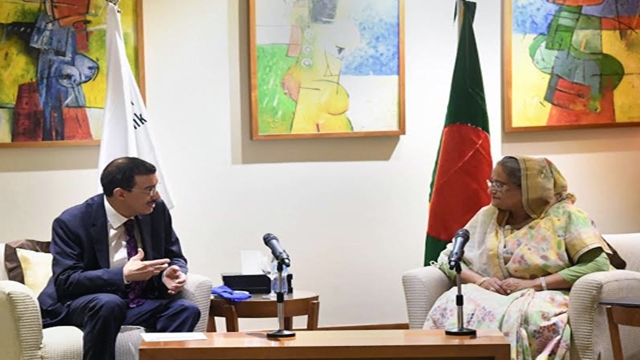 Islamic Development Bank (IsDB) President Dr Bandar MH Hajjar today said Bangladesh is now a role model of development for the IsDB member countries, particularly the African ones, as it has been attaining higher growth on a continued basis.

The visiting IsDB President said this at a joint press conference with Finance Minister Abul Maal Abdul Muhith at the IsDB Bhaban in the city’s Agargaon area. Dr. Hayat Sindi, Senior Advisor to the President IsDB on Science, Technology and Innovation, was present at the press conference.

The IsDB President said the bank has set up their regional hub in Bangladesh due to attaining of higher growth on a continued basis alongside achieving unimaginable successes by the country in different socio-economic fields.

“The geographical location of Bangladesh in terms of strategic aspect is very much important. Apart from this, Bangladesh has a lot of success stories in the socio-economic fields. The country has been attaining around 7 percent growth on a continued basis,” he said.

Hajjar said considering these things, the Jeddah-based lending agency has set up their regional hub in the country.

The IsDB top boss said the establishment of the IsDB regional hub is also a part of its plan for decentralizing its operations and financing. “We have provided $22 billion of financial assistance to Bangladesh over the last four decades to ensure socio-economic development of the country and it has also been able to utilize this funding,” he said.

He said this regional hub will forge partnership with the local stakeholders to ensure socio-economic development through help implementing the Sustainable Development Goals and thus build a platform in this regard.

Mentioning that around $ 1000 billion will be needed for ensuring infrastructural development for the IsDB member countries in the coming years, Dr Hajjar said, the overall fund of the lending agencies including the ADB is $146 billion. “So, the IsDB is encouraging the private sector to invest in infrastructures.”

Finance Minister AMA Muhith urged the IsDB to scale up their assistance towards Bangladesh in the coming days in the socio-economic fields, especially to further boosting infrastructural development.

At the very beginning of the press conference, awards were given to the winners of the 2018 Bangladesh Transformers Roadshow.

Among the winners, the project of Mousumi Nath, Farhana Tasnim Chowdhury, Haseena Khann focused on addressing the need for affordable and clean energy, the team identified jute endophyte as a source of biofuel, by using biomass as raw material.

Earlier in the day, IsDB opened its new regional hub in Dhaka as part of its continued commitment to support sustainable socio-economic development in the region.