Red carpet rolled out for PM in Beijing 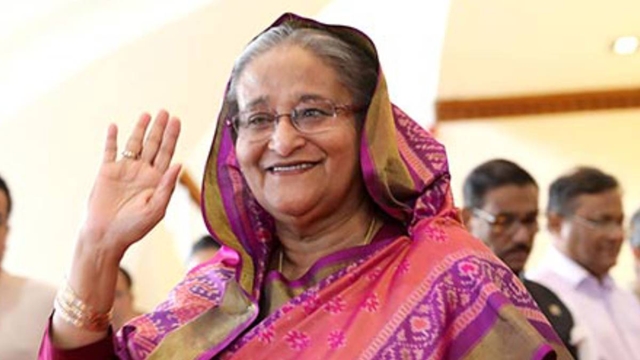 A red carpet was rolled out for Prime Minister Sheikh Hasina when she reached Beijing on Wednesday morning to hold bilateral meetings with Chinese leaders.

A special flight carrying her landed at the Beijing Capital International Airport at 11:05am (local time).

A little child presented a bouquet to Sheikh Hasina.

There, a smartly turned out contingent of the Chinese armed forces presented a guard of honour to the Prime Minister.

The Prime Minister left Dalian for Beijing by a special chartered flight of Air China provided by the Chinese government at 10am (local time).

After reception at Beijing Capital International Airport, she will be taken to Diaoyutai State Guest House in a ceremonial motorcade. She will stay there during her visit to Beijing.

In the afternoon, she will join a community reception followed by a dinner at Legendale Hotel Beijing.

On July 4, Sheikh Hasina will join the welcome ceremony and place wreaths at the Heroes Memorial at the Great Hall of the People in the morning.

She will attend a business roundtable with Chinese business leaders at CCPIT in the afternoon the same day.

On July 5, the Prime Minister is scheduled to deliver a speech at an event to be organised by a Chinese think tank, ‘Pangoal Institution’, in the morning.

Later, the CEOs of Chinese companies are expected to meet Hasina at her place of residence and will hold a meeting with Chairman of NPC Li Zhangshu.

The Prime Minister will hold a meeting with Chinese President Xi Jinping at Diaoyutai State Guest House in the afternoon. She will also join a banquet to be hosted by the Chinese president in the evening at the same place.

Sheikh Hasina left Dhaka on Monday afternoon on a five-day official visit, which is expected to bolster ties with China.