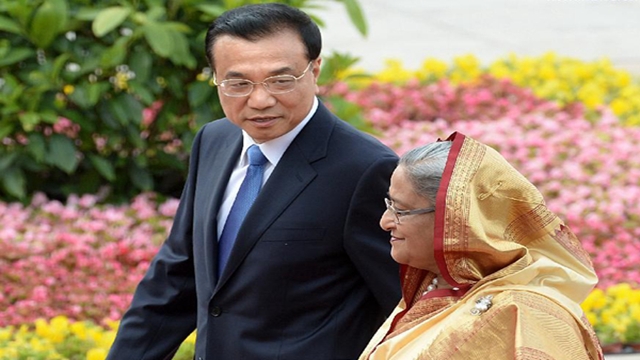 The bilateral talks between Prime Minister Sheikh Hasina and her Chinese counterpart Li Keqiang began at the Great Hall of People here this morning.

“The meeting kicked off around 11 am at the Great Hall of People,” sources
said.

The Great Hall of the People is a state building located at the western
edge of Tiananmen Square in Beijing. It is used for legislative and
ceremonial activities by the government of the People’s Republic of China
(PRC) and ruling Communist Party of China.

Earlier on her arrival at the Great Hall of People around 10:45 am, Sheikh
Hasina was accorded a grand state reception.

The Chinese premier welcomed the Bangladesh prime minister when she
reached the Great Hall of the People and later the two premiers introduced
their delegation members to each other.

Later, Bangladesh prime minister was given a guard of honour by a smartly
turned out contingent drawn from the three services. Accompanied by the
Chinese prime minister, Sheikh Hasina took salute from a decorated dais and
later inspected the guards. National anthems of the two countries were played
and gun salutes were also given on the occasion.

After the meeting, nine instruments are likely to be signed between the
two countries in the presence of the two leaders.

The Bangladesh premier will later join a luncheon at the Great Hall of the
People to be hosted by Keqiang.