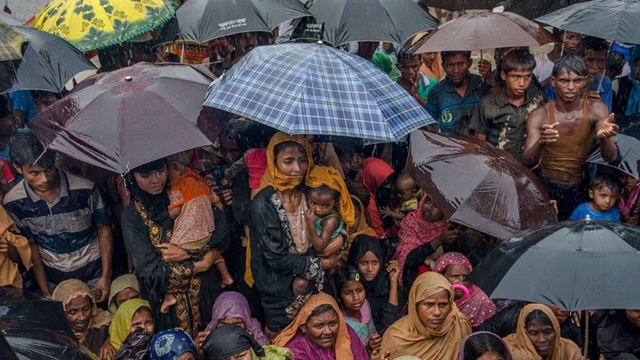 Japanese Foreign Minister Taro Kono arrives here on Monday night on a two-day visit to discuss bilateral issues with special focus on Rohingya issue amid global efforts to expedite the repatriation process of the displaced people to Myanmar.

“I can tell you, it’s a Rohingya-focused visit,” a senior official at the Ministry of Foreign Affairs told UNB on Saturday.

The Japanese Foreign Minister will visit Cox’s Bazar Rohingya camp on Tuesday to see the situation on the ground. “He (Japanese FM) will have a brief dialogue with Rohingya representatives in a transit camp,” the official said adding that he will try to understand Rohingya people’s perspective as a whole.

Japanese Prime Minister Shinzo Abe showed his deep respect for the government of Bangladesh for generously accepting and protecting the Rohingyas on humanitarian ground and the two countries share the importance of stability in Cox’s Bazar from the perspective of enhancing connectivity and securing regional stability, another official said.

Taro Kono’s visit is a demonstration of Japanese government’s willingness to look at the Rohingya issue seriously, he told UNB.

On May 29, Prime Minister Abe held a 50-minute meeting with his Bangladesh counterpart Sheikh Hasina in Japan, and discussed ways to find a “durable and early solution” to the Rohingya crisis.

Bangladesh is now hosting over 1.2 million Rohingyas and most of them entered the country since August 25, 2017.

“We remember that Prime Minister Abe had expressed his intention to continue extending necessary support to the government of Bangladesh with a view to realising the early repatriation of Rohingyas to their place of origin in Rakhine State in a safe, voluntary and dignified manner,” the official said.

Bangladesh has been pushing for measures to be taken by the Myanmar government to create an environment conducive to the return of Rohingyas and address the root causes behind the displacement.

Foreign Minister Dr AK Abdul Momen said the projects of Japan and China will also be affected if this problem remains unresolved and they, in their own interest, should ask Myanmar to take their nationals back.

Referring to Prime Minister's recent China visit, the Foreign Minister said China sees a political will in Myanmar to resolve the Rohingya crisis and is willing to assist the repatriation process.

The Japanese Minister, after visiting Rohingya camp, will have a bilateral meeting with his Bangladesh counterpart Dr Momen on the same day, Tuesday, officials said.

He will also visit Bangabandhu Memorial Museum in the city to pay tributes to Father of the Nation Bagabandhu Sheikh Mujibur Rahman.

Foreign Minister Dr AK Abdul Momen has reiterated his hope that Myanmar will soon start taking its nationals back from Bangladesh as global pressure on the neighbouring country is mounting.

"I'm always optimistic. I'm hoping that the repatriation process will start soon," he said, adding that initially there was less pressure on Myanmar but it is mounting on them now.

Bangladesh has also sought UK’s global leadership in ensuring the early and sustained return of the Rohingyas to their homeland in Myanmar with dignity, rights and security.

Meanwhile, a delegation of Myanmar visited Rohingya camps in Cox’s Bazar on Saturday and interacted with Rohingyas in an effort to remove "trust-deficit" among Rohingyas to begin their repatriation.

Myanmar Foreign Affairs Permanent Secretary Myint Thu led the delegation having officials from its Social Welfare Ministry and the Union Enterprise for Humanitarian Assistance, Resettlement and Development in Rakhine.

Bangladesh and Myanmar signed the repatriation deal on November 23, 2017.

On January 16, 2018 Bangladesh and Myanmar signed a document on “Physical Arrangement”, which was supposed to facilitate the return of Rohingyas to their homeland.

The “Physical Arrangement” stipulates that the repatriation will be completed preferably within two years from the start of repatriation.

The first batch of Rohingyas was scheduled to return on November 15 last year but it was halted amid unwillingness of Rohingyas to return for lack of a congenial environment in Rakhine.