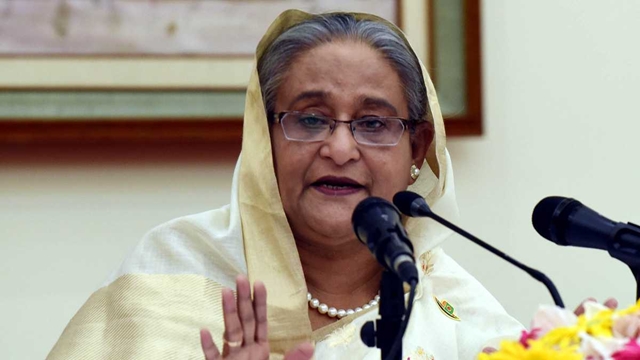 Referring to the recent dengue outbreak in Bangladesh, Prime Minister Sheikh Hasina, also president of the the ruling Awami League, said apart from the administration, party workers have been involved in the cleaning operation for managing dengue.

She also pointed to the recent rumour about milk standard in Bangladesh and said that the rumour was rendered baseless in proper test overseas.

“We should remain cautious about such propaganda for keeping the progress of Bangladesh unhindered,” Sheikh Hasina said.

The premier was addressing a huge community gathering, organised at the famous Central Hall at the heart of London in Westminster on Saturday afternoon (local time),

Sheikh Hasina also reaffirmed her determination to build a hunger-and-poverty-free Sonar Bangla as dreamt by Father of the Nation Bangabandhu Sheikh Mujibur Rahman.

“I’ve nothing to gain personally. Now my only aim is to materialise the ideals of Bangabandhu based on which he liberated the country,” she said.

Sheikh Hasina said that she would be working to her final breathing for realising the dream of Father of the Nation Bangabandhu Sheikh Mujibur Rahman.

“I have no fear of death for working to make Bangladesh a prosperous country as Bangabandhu once dreamt of. I vowed to working until my breaths go on to realise the unfulfilled dream of the Father of the Nation,” she said.

Marking the 44th martyrdom anniversary of the Father of the Nation and the National Mourning Day, UK Awami League organised the community event.

Bangladeshi expatriates of different ages and backgrounds had started to gather at the venue in groups hours before the event.

Wearing black badges, they came from different cities and towns of the United Kingdom and various European countries.

Amid pin drop silence of houseful audience, Sheikh Hasina started her speech with recalling in tears the brutal killing of her father, mother, and other family members on August 15, 1975.

She said the killers of Bangabandhu were not brought to justice, instead they were rewarded by General Ziaur Rahman not only giving them indemnity, but by inducting them into the foreign ministry and sending out to represent Bangladesh as diplomats.

The prime minister recalled the contributions of expatriate Bangladeshis to the country’s economic development as well as their role in different democratic movements.

Sheikh Hasina urged the expatriate Bangladeshis to invest in a bigger way to help establish a developed and prosperous nation.

“We are establishing 100 economic zones in the country for more industrialisation and employment… you can set up mills and factories in these zones by taking advantage of the country’s investment-friendly environment,” she said.

Highlighting her government’s various steps for developing the country, the prime minister said her government has already brought down poverty rate to 21 per cent from 41 per cent.

“We want to cut the rate further. We want not a single person to remain homeless, hungry and without healthcare,” she said.

Spelling out her government’s tremendous success in different sectors including agriculture, education, health and energy, the prime minister said the country is marching towards development and prosperity due to continuation of democracy.

Referring to the December 30 general elections, Sheikh Hasina said the BNP suffered a debacle in the polls as the party was not sincere in the elections.

“BNP wanted to make the polls questionable and they did nomination trade by giving 5/6 candidates to a single seat,” she said.

Elaborating evil politics of the BNP-Jamaat government, the premier said the BNP-Jamaat resorted to terrorism, militancy, and corruption during their misrule from 2001-2005.

Mentioning the BNP-Jamaat mayhem from 2013-2015 to overthrow the government and resist elections, Sheikh Hasina said they killed and injured a huge number of people through arson attacks.

“Even the women and children were not spared from them,” she said.

At the outset of her speech, Sheikh Hasina paid rich tributes to Father of the Nation and other martyrs of the August 15 carnage as well as four slain national leaders.

Recalling the dark days after her return from exile following the 15th August tragedy, Sheikh Hasina said she came back home after losing all her near and dear ones on that black night.

In this regard, the prime minister mentioned that she had observed the anniversary of the martyrdom of the great leader Bangabandhu by risking her life.

Sheikh Hasina said that attempts on her life were made time and again after her return from exile.

Among others present on the dais were AL Presidium Member and former Commerce Minister Muhammad Faruk Khan and State Minister for Foreign Affairs Shahriar Alam.

At the beginning of the programme, a minute’s silence was observed as a mark of profound respect to the memory of Bangabandhu and other martyrs of the August 15 massacre.