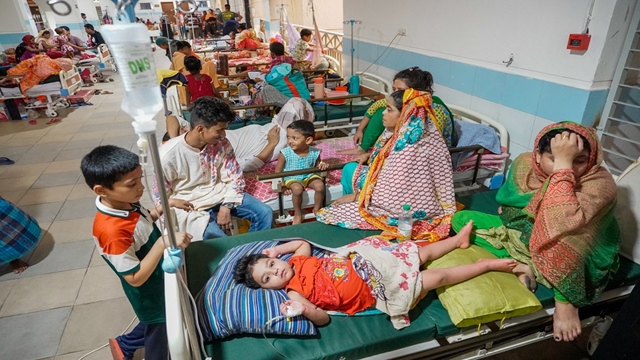 Three more people have died of dengue and 1,460 others have been infected with the mosquito-borne disease, showing a significant fall in the number of dengue patients than Friday’s 1,719.

The fresh deaths were recorded in Dhaka and Faridpur on Saturday while the new infections in 24 hours till Saturday morning.

In Dhaka, a woman lost her battle to dengue while undergoing treatment at Dhaka Medical College Hospital (DMCH) in the morning.

The deceased was identified as Monwara Begum, 45, wife of Saiful Islam of Chamakpur village in Mithamain upazila of Kishoreganj district.

Saiful said Monwara was admitted to Kishoreganj Sadar Hospital after she was diagnosed with dengue about 10 days back.

She was taken to the DMCH on August 13 where she died at the intensive care unit around 10:45am, he said.

In Faridpur, two people, including a college student, died of dengue at Faridpur Medical College Hospital.

The deceased were identified as Sumon Bashar Raj, 18, son of Mizanur Rahman of Changpur village in Magura district and a second-year student of a government college in Magura, and Yunus Sheikh, 55, son of Aynal Sheikh of Rajbari.

Mostafizur Rahman Bulu, assistant director of the hospital, said Sumon was admitted to the hospital on August 12 and he breathed his last around 10am.

The victim’s father said Sumon was detected with dengue at Magura Hospital on August 8 and later sent to the medical college hospital.

He was taken to the hospital on August 12 with dengue, he said.

Of the new dengue infections, 621 were reported in Dhaka city alone while the rest in other divisions, according to the Health Emergency Operation Center and Control Room of the Directorate General of Health Services (DGHS).

The government has so far confirmed 40 deaths although unofficial estimates suggest the death toll is much higher.

The DGHS said 51,476 people were hospitalised with dengue since January this year. Of them, 43,580 had made full recovery.

Currently, 7,856 patients are undergoing treatment at different hospitals and clinics.

Bangladesh is grappling with its worst outbreak of dengue. Dhaka, the densely-populated megacity, has been at the centre of the outbreak.

There is no specific treatment for dengue or severe dengue, WHO says. But early detection and access to proper medical care lowers fatality rates below 1 percent.