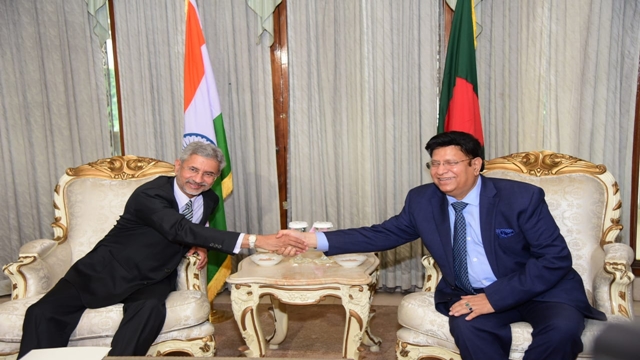 Though Dr Momen described Jaishankar’s maiden visit (as minister) to Bangladesh as a “courtesy trip,” the two sides are likely to touch upon the matters relating to Prime Minister Sheikh Hasina's forthcoming visit to India, connectivity, water issues and Rohingya crisis at the meeting that began at 11:05am on Tuesday.

Jaishankar on Monday night said Bangladesh and India have many things to discuss to take the relationship between the two neighbouring countries to a higher level.

Before the meeting, the Indian minister visited Bangabandhu Memorial Museum at Dhanmondi-32 and paid tributes to Father of the Nation Bangabandhu Sheikh Mujibur Rahman by placing wreaths at his portrait there, an official told UNB.

There will be a media briefing at 12pm after the meeting between the two Foreign Ministers.

Dr Momen will host a lunch in honour of his Indian counterpart after the meeting.

The Indian Foreign Minister is scheduled to meet Prime Minister Sheikh Hasina at her official residence around 5pm on Tuesday.

He will leave Dhaka for Kathmandu on Wednesday morning.

India is a leading development partner of Bangladesh as it has extended concessional lines of credit to the tune of around 8 billion US dollars.