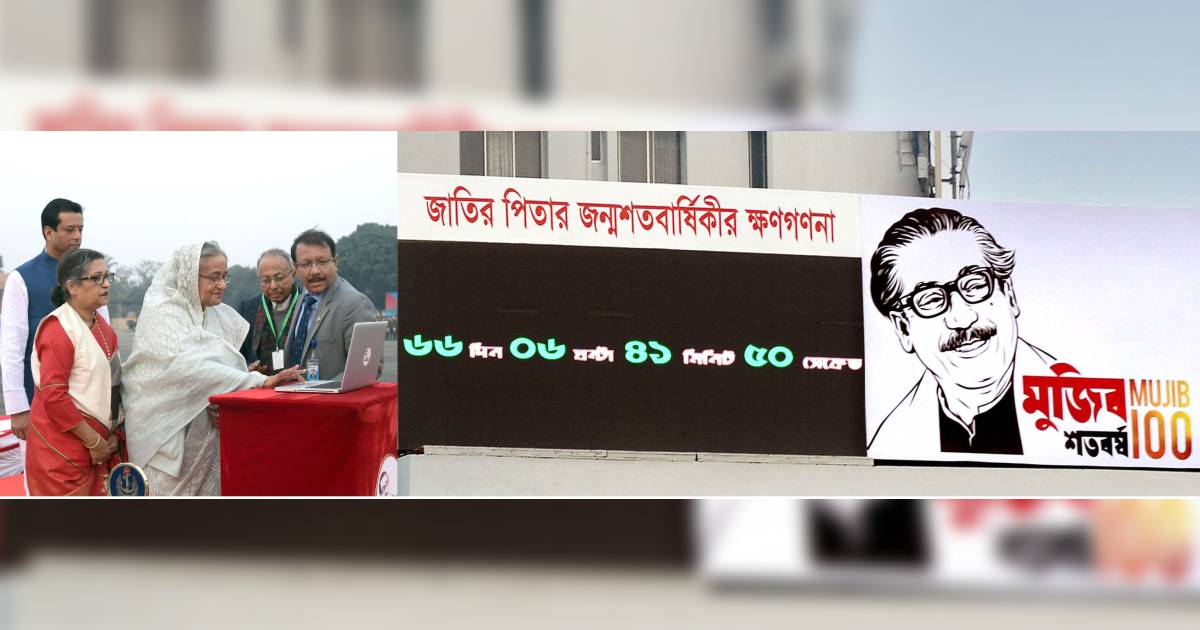 The countdown to the birth centenary celebration of Father of the Nation Bangabandhu Sheikh Mujibur Rahman began on Friday through a gala opening ceremony.

Prime Minister Sheikh Hasina formally inaugurated the nationwide countdown ceremony at the National Parade Square, where Bangabandhu landed in the newly liberated and sovereign Bangladesh on January 10, 1972. Sheikh Hasina opened it through unveiling the “Logo” of the Mujib Borsho to be celebrated from March 17, 2020 to March 26, 2021.

Through observing Bangabandhu’s birth centenary, the government aims to present the life and works of Bangabandhu before the people, especially the new generation.

With the inauguration, the countdown began simultaneously in every district, upazila and all public gathering places across the country.

Devices for countdown are being set up at different public places in the city, divisional cities, districts, city corporations and upazilas across the country.

Twelve city corporations have set up devices in 28 points while another 83 being set up in divisional cities, 53 districts, two upazillas and Dhaka city, including Dhaka University. Many ministries, divisions, departments, socio-cultural organisations and public and private universities are also setting up devices at their own initiatives.

Marking the 10th January, a symbolic C-130J aircraft of the historic Homecoming of the Father of the Nation landed at Tejgaon Old Airport, which is now known as the National Parade Square, at 04:35 pm. Famous song of Sondhya Mukhopaddhya 'Bangabandhu Tumi Fire Ele' was played after the landing of the plane, which was played on this day back in 1972.

21 Gun Salute heralded just after opening the door of the plane after its arrival at the tarmac the airport with a taxi.

About 150 people, including students of educational institutions, welcomed the plane, while nearby place of its exit door have been illuminated with LESAR light.

LESAR light slowly went down to the edge of the red carpet reflecting homecoming of Great Leader Bangabandhu as the lighting guide of the nation. A smartly-turned out contingent drawn from Bangladesh Army, Bangladesh Navy and Bangladesh Air Force presented a state salute on the occasion.

Sheikh Hasina inaugurated the countrywide celebration of the events digitally through pressing a button.

There will be an inauguration programme on March 17 this year where eminent personalities from home and abroad will attend.

For ensuring smooth celebration of the birth centenary, the government has formed a national committee and a national implementation committee.

Younger daughter of Bangabadhu Sheikh Rehana and grandson Sajeeb Wazed Joy were present at the National Parade Square with the Prime Minister.