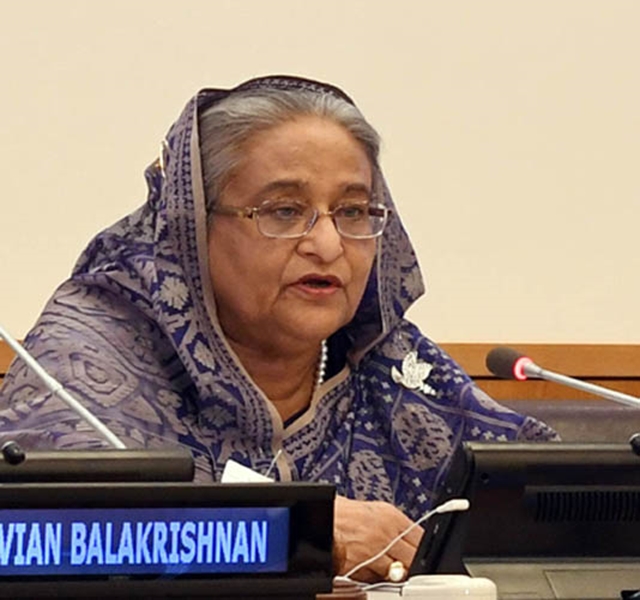 Prime Minister Sheikh Hasina today called the UN to play an effective role in making the digital world safer and continue its work on norm setting for information security.

“UN can play a critical role in making the digital world safer. The work
on norm-setting in information security should continue,” she said in a
statement at a high-level event on the sidelines of the UN General Assembly
(UNGA) session.

UN Office for Disarmament Affairs (UNODA) on Cyber Security and
International Cooperation and Bangladesh’s Permanent Mission to the UN
jointly staged the event when Sheikh Hasina warned the global community of
the risks of misuse of ICT.

“The abuse of ICT may pose serious threat for international peace and
security (as) cyber space has no physical borders,” she said, adding the
capacity of states for securing IT was “far from even”.

The Bangladesh premier said while some states were working on using ICT
for military purposes, “terrorists and violent extremists are using it to
spread their toxic narratives”.

Sheikh Hasina, who is now in New York to attend the 73rd UNGA Session,
said in an inter-connected world the weaker links could cause disruption for
others and “cyber security thus became a concern for all”.

“Our hard earned gains in the ICT sector need to be made secure as
critical infrastructures around the world have become regular target of
cyber-attacks,” she said.

Sheikh Hasina said identifying the actual source of wrongful activity
remained a challenge for developing countries, laying importance on access of
the developing countries to the technologies and information to detect such
evil or wrong activities.

She said mechanisms so far used for cyber security should as well be made
more inclusive and the question of rights and freedoms in cyberspace needs to
be duly addressed as well.

The premier said developing countries should be given a chance to voice
their concerns “which the UN Secretary General recognised it in his Agenda
for Disarmament”.

The prime minister said the norms and principles for responsible behavior
of the member states in cyberspace should receive unconditional support.

“The principles of the UN Charter and relevant international law should
apply to the cyber space. States must remain true to their commitment not to
conduct or support any harmful cyber activity,” she said.

The prime minister said the states should also prevent their territory
from being used for wrongful acts against other nations’ interest.

“Bangladesh takes these commitments seriously and we expect others to do
the same,” she said.

Sheikh Hasina said international cooperation in capacity building for
cyber security must be given priority. Development partners should consider
this to be part of their internationally agreed commitments.

Bangladesh was working on building a complete cyber security eco-system,
she said and mentioned about passage of the Digital Security Act by the
parliament.

A Cyber security Incident Response Team is in place, which cooperates with
other countries and a Digital Forensic Laboratory has been set up for
training purposes, she said.

“A National Cyber Security Agency is in the process of being set up. We
hope to keep learning from the experience of other friendly countries,” the
prime minister said.

Sheikh Hasina said twenty years ago, during her first term in office she
launched the idea of a culture of peace at the General Assembly.

“As I draw close to the end of my third term in office, I pledge
Bangladesh’s support for promoting a culture of cyber security at the UN and
beyond,” she said.

The UN High-level Conference on Cyber-security can be an important
building block for that.

“We must demonstrate our strong political resolve to create a secure,
stable, peaceful, inclusive and accessible cyber space for our future
generations,” Sheikh Hasina said.