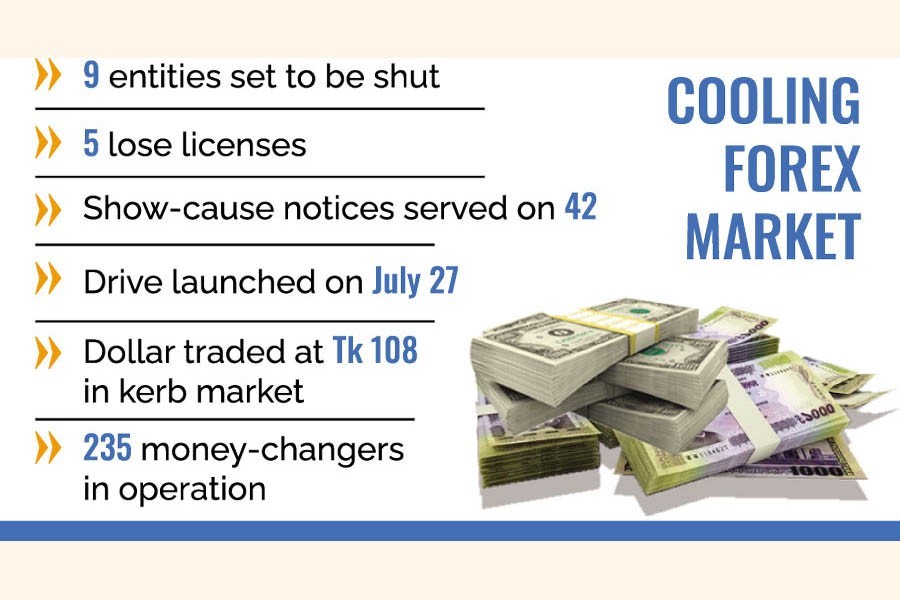 Cleanup action continues to manage Bangladesh's volatile forex market as 14 moneychangers are being meted out punitive actions in government bid to tame the dollar and stabilise reserves.

Sources said nine of the entities were going to be shut down for freewheeling sans government sanction while licences of five others suspended.

The Bangladesh Bank (BB) has taken the decisions on the basis of its special drive at moneychanger houses, which was launched on July 27 last, just a day after the cash dollar price hit an all-time high at Tk 112 on the kerb market.

He also said the central bank asked 42 moneychangers to submit their clarifications against the notices within seven working days to the relevant department of the BB.

"We've taken next course of action after receiving replies to the notices," the spokesperson said while replying to a query.

Another BB official said five moneychangers, whose licences have already been suspended, had flouted the rules and regulations particularly through holding excess cash money both in local and foreign currencies.

"The moneychangers had held unauthorized foreign currency along with suspicious amounts of the Bangladesh Taka (BDT)," the central banker explains.

A money changer is allowed to hold a maximum of $25,000 at the close of each business day.

Cash beyond this limit will have to be deposited with their respective bank's foreign-currency account.

The balance of that account must not exceed $50,000 at any point in time.

Meanwhile, the exchange rate of cash dollar against the BDT on the open market, known as kerb market, remained mostly stable since Thursday as the regulatory drive on moneychangers continues.

"We sold the cash dollar at Tk 108 on Tuesday and purchased the US currency by offering Tk 107 each," a senior currency trader said.

He also urges the central bank to shut down the operations of unauthorized moneychangers immediately for ensuring stability on the money market.

On the other hand, the BB continues to provide its foreign-currency support to scheduled banks for managing the forex-market volatility.

It sold $79 million more directly to different banks at market rate on Tuesday to help them meet a growing demand for the greenback-as global price rises have led to import-cost escalation with its resultant pressures on reserves of Bangladesh as also of many other countries.

On Monday, the central bank sold $50 million to the banks on the same ground.

The US dollar was quoted at Tk 94.70 each on the inter-bank market on the day, unchanged from the previous level, according to the operators.

The greenback was quoted at a maximum of Tk 94.75 for the sale of bills for collection, generally known as BC, on the day-unchanged from the previous working day.

Some banks, however, traded the greenback at rates ranging between Tk 94.75 and Tk 107 to their customers for settling import-payment obligations, ignoring their announced rates.

The BB has so far injected $1.26 billion from the reserves directly into commercial banks as liquidity support for import payments in the current fiscal year (FY), 2022-23.

In FY22, the central bank sold $7.62 billion from the reserves to the banks for the same purpose.

Bangladesh's forex reserves stood at $39.67 billion on Tuesday from $39.54 billion in the previous working day.