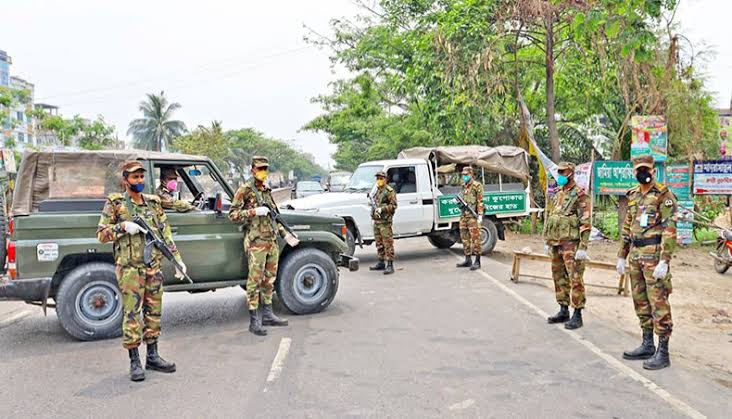 The country goes into seven-day strict lockdown on Thursday morning as the Covid-19 situation has worsened with the alarming rise in fatalities and infections from the highly contagious virus.

Law enforcing agencies are in tough position in the field to implement the lockdown.

All government and private offices – excluding emergency and some other services –remain closed as part of this measure.

The members of the armed forces and Bangladesh Border Guard (BGB) were deployed along with regular police force to implement the lockdown.

Law enforcement agencies, including the police and Rapid Action Battalion (RAB), and local administration have been given the authority to arrest and fine violators of the lockdown rules.

The Cabinet Division on Wednesday published a gazette notification on the restrictions with 21-point directives which came in force from Thursday 6:00am to July 7 midnight.

The 21-point directives are: All government, non-government and autonomous organisations will remain closed. Public transport services (river, rail and road) and domestic flights will remain suspended. All private motorised vehicles will keep off the road but goods-laden trucks, covered vans and cargo vessels have been kept outside the purview of the restrictions. The offices of the air, sea, river and land ports will remain open.

Banks will remain open till 3:00 pm while banking service will be available from 10:00 am to 1:30 pm. Courts will run virtually during the lockdown.

Kitchen stuff and other essentials can be sold in open spaces from 9:00 am to 5:00 pm by maintaining health rules. Market authorities and local administration will ensure that health guidelines are maintained. Hotels and restaurants will remain open from 8:00 am to 8:00 pm only for takeaway and online services.

None will be allowed to go out except for emergencies (buying medicines, daily commodities, medical treatment and burial). Legal action will be taken against the violators.

People can go out to take corona vaccine but they must show vaccination cards.

International flights will be in operation. Air passengers can use transport by showing their tickets.

The Ministry of Religious Affairs has issued instructions on prayers at mosques and health guidelines for the devotees.

Under the ‘Army in Aid to Civil Power Act’, the Armed Forces Division will deploy required number of troops to ensure effective patrolling at the field level. The district magistrate will confirm the matter in consultation with the local army commander.

The district magistrate will hold a coordination meeting with the officers concerned at the district level to determine the jurisdiction, method, and time of patrolling of the armed forces, BGB, police, RAB and Ansar.

The Ministry of Public Administration has appointed a total of 106 executive magistrates across the country.

The Director General of Directorate General of Health Services (DGHS) has allowed the district administration and the police force to take legal action against the lockdown violators on his behalf.

To this effect, law enforcers and local administration have taken elaborate preparations, including putting up barricade on roads across the country, arrangements for mobile court drive.

According to Inter Service Public Relation Directorate (ISPR), arm forces will be on duty across the country as per ‘Army in Aid to Civil Power Act’.

Meanwhile, Dhaka Metropolitan Police (DMP) issued a warning that they are prepared to arrest anyone who will go out without emergencies during the strict lockdown.

DMP Commissioner Shafiqul Islam said police will arrest and file cases against the violators under section 269 of the Penal Code, which has not been done before.

Jatiya Press Club will also remain closed during the lockdown.

Earlier, the government on June 16 extended the countrywide ‘so-called’ lockdown for a month until July 15 reopening all government and private offices, autonomous organisations, banks and financial institutions.

On June 28, the closure of the border with India was extended for another 14 days until July 14. The border was first closed on April 26 to check the spread of corona transmission

On June 6, the government extended the countrywide lockdown for 10 days until June 16, saying the deputy commissioners of high-risk districts can announce lockdown in their respective areas after discussion with the local representatives and the committees concerned.

Due to a rise in corona cases from mid-March, the government imposed a relaxed lockdown for one week from April 5.

But the government allowed resumption of public transport services in city corporation areas from April 7 as well as reopening of shops and markets for five days from April 9 in the face of protests.

The relaxed lockdown was extended for two more days until April 13. As per the suggestion of health experts, the government enforced a stricter lockdown from April 14 to April 22, which was extended until July 15 in phases.

On May 8 last, the Institute of Epidemiology, Disease Control and Research (IEDCR) confirmed the detection of the Delta variant, which was classified by the World Health Organization as a "variant of global concern", in Bangladesh.