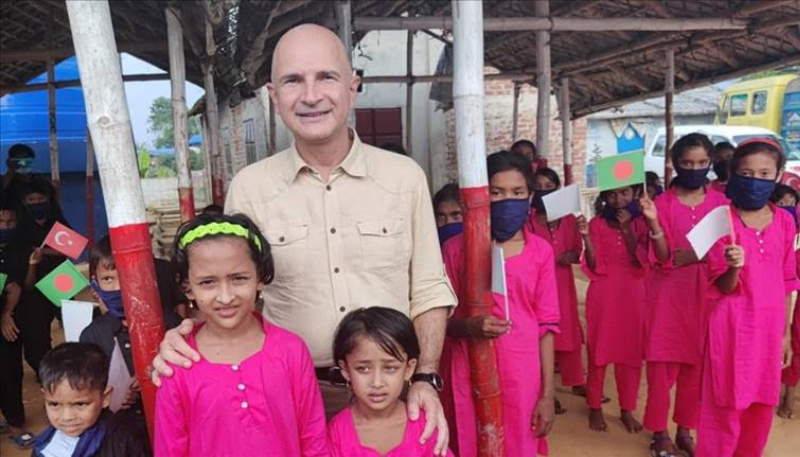 Turkish Ambassador to Bangladesh Mustafa Osman Turan has said his country would continue its whole-hearted humanitarian support to Rohingya refugees in Bangladesh until the peaceful repatriation of the persecuted people to their home country of Myanmar.

The ambassador made the assurance on Saturday during his two-day visit to Bangladesh's southern tourist-hub district of Cox's Bazar, housing more than 1.2 million Rohingyas who fled a brutal military crackdown in Myanmar's Rakhine State in August 2017.

Turan said Turkey is always supportive to reduce the suffering of the Rohingya since the very beginning of the crisis.

"We, along with the UN and other concerned authorities, have been working for peaceful and dignified repatriation of the Rohingya," he added.

The Rohingya also expressed their gratitude to the Turkish people and their government for their support that covers medical treatment, food supplies, recreation, vocational training, mental support and other areas, the release added.

They expressed appreciation for the Turkish voice at global platforms for resolving the Rohingya crisis as well as continuous support for the forcibly displaced Myanmar's nationals.

“Our main goal is to repatriate them (Rohingya) to their home country of Myanmar as soon as possible and in this regard, we expect a very strong support of Turkey,” Hayat told Turan.

Turan also hosted RRRC and all 34 camp-in-charge at a kitchen built by TIKA to serve hot meals to Rohingya refugees.

The envoy first visited the Turkish Field Hospital located at a camp considered to be the best health facility for Rohingya refugees in the makeshift tents.

Since June 1, the hospital has been serving 2,000 Rohingya and hosting people daily while the medical facility is well furnished by the latest health service technology.

While 30 patients can get admission to the hospital, that can be extended to 50 in case of emergency. A total of 80 medical staff, including 13 doctors, are currently serving at the hospital, with 26 Rohingya employees, 22 from the host community, and the rest from Turkey, the release said.

The envoy opened the food distribution center and the playground for Rohingya children, both of which were newly renovated by TIKA at Camp 16.

Turan also visited a soap atelier and a female sewing training center operated by the Turkish Diyanet Foundation while the Turkish Red Crescent is running a health post and a child recreational learning center on “Turkish Hill” in Camp 17.