PM asks all to keep up pace of development 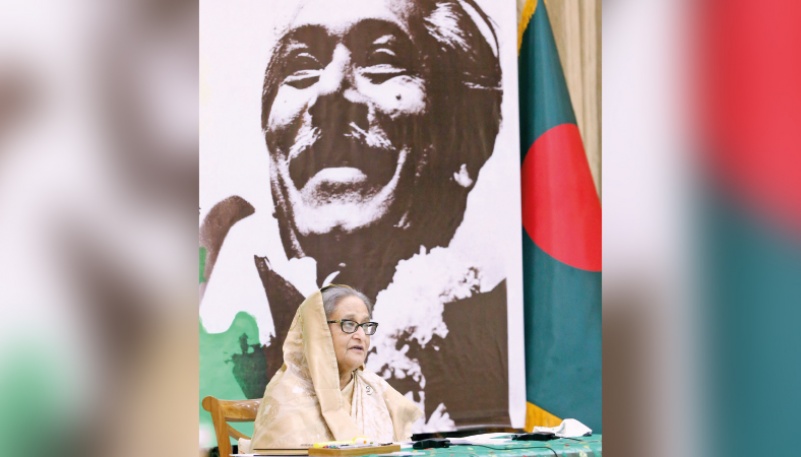 Prime Minister Sheikh Hasina on Monday called upon the people to keep up the pace of the economic progress that the country has achieved in the great stride of all to build 'Sonar Bangla'.

"InshAllah, we'll change the fate of distressed people by implementing the dream of the Father of Nation. I also urged the people of the country to keep up the progress already achieved for building Sonar Bangladesh," she said.

The Prime Minister said this while presiding over a programme titled "Jatir Pita Mukta Swadesh-a", joining it virtually from her official residence Ganobhaban, reports UNB.

Hasina said the goal of her government is to change the fate of the people for whom Bangabandhu liberated the country, struggled throughout his life, endured repeated incarcerations and repression, and dedicated his life.

"Today, I express my gratitude to the people of Bangladesh as they kept their trust in me and I've got the scope time and again to work for the development of the people, coming in power," she said.

The Prime Minister reiterated her firm conviction to bring smiles to the faces of unhappy people by building the country as hunger- and poverty-free 'Sonar Bangladesh' for which the Father of the Nation made the country independent.

Hasina said people came to know about a complete plan to rebuild independent Bangladesh from the historic January 10 speech Bangabandhu delivered after returning home from Pakistan jail in 1972.

She said the Father of the Nation, in his speech, had mentioned how the independent country would run and which ideology would be followed by. "We got a complete plan in his speech," said Sheikh Hasina, the eldest daughter of Bangabandhu.

Noting that Bangabandhu had dreamt of building Bangladesh as a developed and prosperous country, she said he had got only three and half years (in power) and turned Bangladesh into a least developed country.

Referring to the assassination of the Father of the Nation, she said when he had taken steps for the empowerment and socioeconomic development of the common, poor and grassroots people, the August-15 blow came.

This blow was not to assassinate just a president, rather to kill the ideology and spirit of an independent country, which was reflected on the activities of the successive regimes, she said.

The Prime Minister said the killers of August 15 carnage, anti-liberation forces, war criminals, human rights offenders had grabbed power and tried to do anything to change the fate of people.

Mohiuddin Ahmed had received Bangabandhu at Heathrow Airport on January 8, 1972 when he went to London after being freed from a Pakistan jail.

The discussion was followed by a cultural soiree.