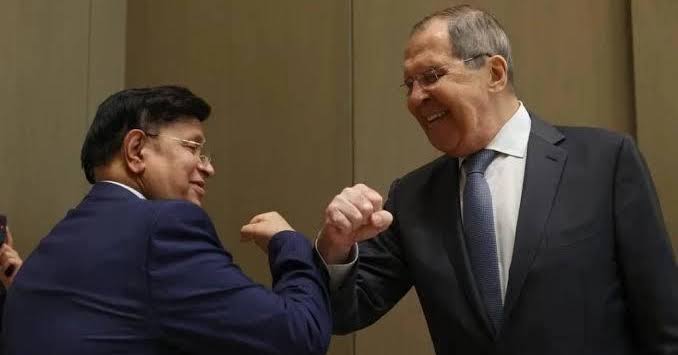 Foreign Minister AK Abdul Momen and his Russian counterpart Sergei Lavrov on Monday shed light on the bilateral relations between Bangladesh and Russia and expressed their desire to take the relation to a greater height.

During a telephone conversation, the Russian foreign minister expressed his regret for not being able to come to Dhaka due to schedule complications and expressed his intention to make the visit soon.

Momen thanked Russia for its cooperation with Bangladesh in the construction of the Rooppur Nuclear Power Plant and invited Russian President Putin to visit Bangladesh on behalf of Prime Minister Sheikh Hasina, according to the Ministry of Foreign Affairs.

Lavrov was scheduled to visit Bangladesh on November 23, mainly to attend the 22nd IORA Council of Ministers meeting, to be held in Dhaka on November 24.

Russia is a dialogue partner of the Indian Ocean Rim Association (IORA) while Bangladesh is the current chair of group.

Momen highlighted the role of the Soviet Union in the War of Liberation of Bangladesh and said that Dhaka will always remember it with gratitude.

He sought the cooperation of the Russian foreign minister in sending the Rohingya refugees, who have taken shelter in Bangladesh, back to Myanmar.

In reply, Lavrov assured Momen he would talk with Myanmar.

Among other things, the two ministers also discussed the cooperation between Bangladesh and Russia in the United Nations and other international organizations.

On Sunday, Momen said the increased activities of Russia due to the situation in Ukraine might be the reason behind the revised decision taken by Russian Foreign Minister Sergei Lavrov.

"I can understand it. They are very busy. Their activities due to the war have increased to a large extent. Maybe for that reason he is unable to come," Momen told reporters after attending a programme in a Dhaka hotel.

The IORA Council of Ministers meeting, to be hosted by Bangladesh, will be preceded by the 24th meeting of the Committee of Senior Officials, to be held on November 22-23.

The IORA is an inter-governmental organisation aimed at strengthening regional cooperation and sustainable development within the Indian Ocean region through its 23 member states and 10 dialogue partners.

The 23 member states of IORA and 10 dialogue partners are expected to join the ministerial and senior official meetings.