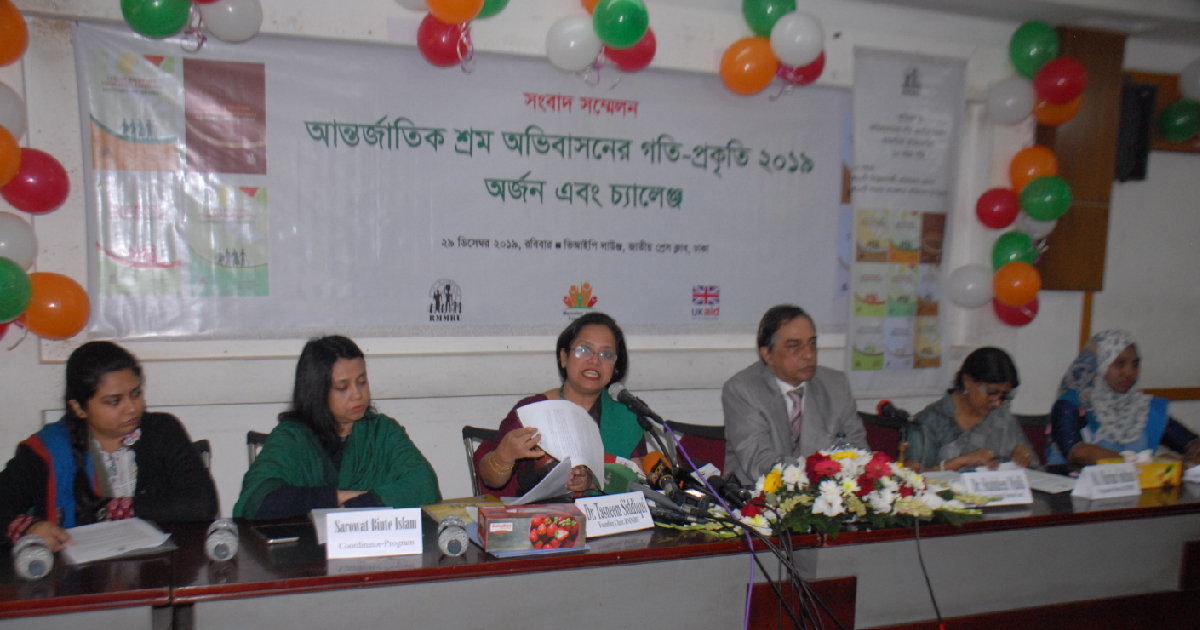 Despite increased inflow of remittance in 2019, labour migration from Bangladesh has declined by about 10 percent compared to the previous year, says a new study.

The study carried out by Refugee and Migratory Movements Research Unit (RMMRU) reveals that 604,060 Bangladeshi workers migrated to the Middle Eastern (89 pc) and South Asian countries (11 pc) between January and November, 2019 against 734,181 during the corresponding period in 2018.

“If the trend continues till December, the rate is likely to decrease by 10 percent…it’s not necessarily a bad thing as we’ve to consider that Malaysia has refrained from taking Bangladeshi manpower over political turmoil, hence, the migration rate has dropped slightly,” said RMMRU founding chair DrTasneem Siddiqi.

As of November 2019, the report says, the total remittance inflow into the country reached 16.67 billion US dollars.

“If the rate holds up till December, our total remittance in 2019 will be nearly 18.19 billion US dollars which is a 17.05 percent increase compared to that of previous year,” Dr Siddiqi said.

Despite the increased cases of violence against Bangladeshi female workers in the Middle East countries, the number of total female migrant workers is likely to go up by 4.52 percent in 2019, the report reveals.

A total of 97,430 female workers have migrated abroad till November this year and 59.82 percent of those have migrated to Saudi Arab.

However, the report highlighted that only one percent of the total migrated Bangladeshi workers have professional skills. Data of the Bureau of Manpower, Employment and Training (BMET) suggests that 44 percent of total migrant workers are ‘skilled’ ones.

Supreme Court lawyer Dr Shahdeen Malik focused on the issue saying those who are labeled as skilled are being proven unskilled in foreign standards.

“Most of the 44 percent skilled workers are female workers who received a 21-day training before going abroad. That doesn’t necessarily make them skilled. Besides, in foreign markets our skilled manpower has no demand…Bangladesh is still known as the unskilled workers supplier abroad,” he said.

“Bangladesh is the 5th largest remittance-providing country to India. The number of Indian manpower working in Bangladesh cannot exceed 2 lakh but they are bringing for their country minimum 4 billion US dollars a year as remittance. This is because of their higher skill level,” he said.

The 'Labour Migration Trend Report-2019' listed a set of recommendations for the benefit of country’s labour migrantion sector.