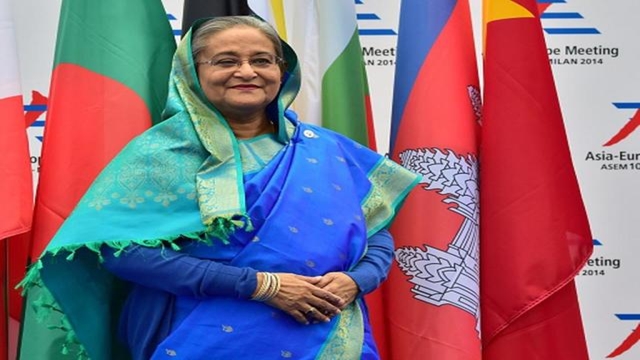 Prime Minister Sheikh Hasina was given a red carpet reception as she reached Nepal this morning on a two-day official visit to attend the 4th Summit of the Bay of Bengal Initiative for Multi-Sectoral Technical and Economic Cooperation (BIMSTEC) at the Nepalese capital.

On her arrival Prime Minister Sheikh Hasina was given a static guard of honor by a smartly turned out contingent of Nepalese Army.

The summit will begin this afternoon at Hotel Soaltee Crowne Plaza in Kathmandu with the participation of the heads of government of the seven- nation regional group.

After the reception at the airport, Sheikh Hasina was escorted to Hotel Soaltee Crowne Plaza at Tahachal Marg in a ceremonial motorcade where she will be staying during the visit.

On the sidelines of the summit, the Bangladesh premier is expected to hold meetings with her Indian and Nepalese counterparts Narendra Modi and KP Sharma Oli and Bhutan’s Chief Adviser or interim government chief Dasho Tshering Wangchuk.

Sheikh Hasina and other BIMSTEC leaders are set to make a joint call on Nepalese President Bidya Devi Bhandari at Sheetal Nibash, the Presidential Palace, in Kathmandu.

They will also attend a banquet luncheon there to be hosted by the Nepalese President. In the afternoon, Sheikh Hasina along with other leaders will attend the opening session of the 4th BIMSTEC Summit at Hotel Soaltee Crowne Plaza.

Countering terrorism, enhancing regional connectivity and boosting trade are expected to be key focus of the BIMSTEC summit.

Sheikh Hasina and other BIMSTEC leaders will also join a gala dinner to be hosted by Nepalese Prime Minister KP Sharma Oli in the city’s Hyatt Regency Hotel in the evening on that day.

On Friday morning, the Bangladesh Prime Minister and other leaders will join the BIMSTEC Leaders’ Retreat and closing sessions of the summit.

This sub-regional organisation came into being on June 6, 1997 through the Bangkok Declaration.