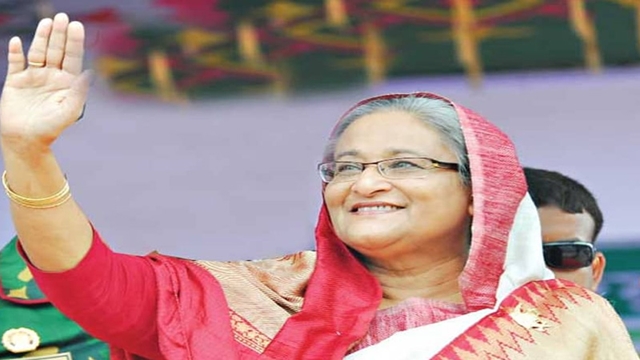 Bangladesh High Commissioner to the UK Nazmul Qaunine received the premier at the airport.

Earlier, the flight departed Hazrat Shahjalal International Airport in Dhaka for London at 10:20 am (BST).

The prime minister will address the 73rd Session of the UN General Assembly at the UN Headquarters in New York in the evening (local time) on September 27 and hold a meeting with UN Secretary General Antonio Guterres on the same day.

On the sidelines of the UNGA, she will also hold bilateral meetings with a number of world leaders, including Estonian President Kersti Kaljulaid and Dutch Prime Minister Mark Rutte.

Sheikh Hasina will attend a Welcome Reception to be hosted by US President Donald J Trump, while US Secretary of State Mike Pompeo is expected to call on her.

This year’s theme of the general debate is ‘Making the United Nations relevant to all people: Global leadership and shared responsibilities for peaceful, equitable and sustainable societies’.

Prime Minister Sheikh Hasina will place some specific proposals at the UNGA in continuation of her previous five-point proposal for resolving the Rohingya crisis, Foreign Minister AH Mahmood Ali told a press conference at the Foreign Ministry in Dhaka on Thursday.

After making nearly two-day stopover in the British capital, the prime minister will leave London for New York on Sunday morning by a British Airways flight.

After the reception at the airport, a ceremonial motorcade will escort the prime minister to Hotel Grand Hyatt New York, where she will be staying during her visit to the USA.

On the first day of her visit to the USA, Sheikh Hasina will attend a reception to be accorded to her by the Bangladesh community in the United States at Hotel New York Hilton Midtown in the evening.

“She will also present Bangladesh’s different socioeconomic advancements, including establishment of digital Bangladesh and the country’s ongoing democratic process to world leaders,” he said.

He said Inter Press Service (IPS), a global news agency, will give its prestigious ‘International Achievement Award’ to Prime Minister Sheikh Hasina for her dynamic and farsighted leadership in addressing Rohingya crisis while Global Hope Coalition will confer her ‘2018 Special Recognition for Outstanding Leadership Award’.

The prime minister will return home in the morning on October 1 via London.