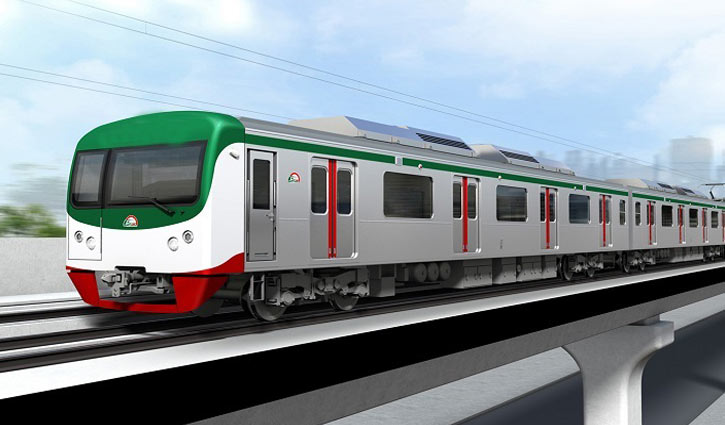 The Executive Committee of the National Economic Council (ECNEC) today approved another two metro rail projects involving an overall estimated cost of Taka 93,800 crore in a bid to address the traffic congestion in the capital and infuse more dynamism in the mass transportation system.

The approval came from the ECNEC meeting held at the NEC Conference Room in the city’s Sher-e-Bangla Nagar area with ECNEC Chairperson and Prime Minister Sheikh Hasina in the chair.

Briefing the reporters after the meeting, Planning Minister MA Mannan said that a total of 10 projects were approved today involving an overall estimated cost of Taka 1,00,025.23 crore.

“Of the total project cost, Taka 30,466.02 crore will be provided from the fund Government, Taka 515.84 crore from the concerned organizations’ own fund while the rest of Taka 69,043.37 crore from project assistance,” he added

The Planning Minister said that the Mass Rapid Transport (MRT) Line 1 and 5 would be implemented with an estimated cost of Taka 93,800 crore to tackle the traffic congestion.

Of the total cost of the two metro rail projects, Taka 25,232.60 crore will come from the state exchequer including grant amount while Taka 68,567.32 crore will be available as project assistance from the Japan International Cooperation Agency (JICA).

Dhaka Mass Transit Company Limited will implement both the projects.

The Planning Minister said that the ECNEC meeting was informed that the work for the two metro line projects would be completed within the stipulated timeframe and estimated cost.

According to the Planning Commission, the work for MRT Line 1 Project will be completed by December 2026 with an estimated cost of Taka 52,561.43 crore. Of the amount, Taka 13,111.11 crore will come from the Government of Bangladesh portion while the rest of Taka 39,450.32 crore will come as project assistance from JICA.

Out of the 31.24 kilometer MRT Line 1, around 16.21 kilometers would be underground from Hazrat Shahjalal International Airport to Kamalapur while around 11.36 kilometers from Kuril to Purbachal Depot would be elevated. Besides, there will be 3.65 kilometer underground transition line from Natun Bazar to Kuril.

On the other hand, the MRT Line 5 has been divided into two routes- northern and southern. The total cost for the MRT Line 5 project has been estimated at Taka 41,238.54 crore of which Taka 12,121.49 crore will come from the state exchequer and grants while Taka 29,117 crore as project assistance from JICA.

The length of the northern route is 20 kilometers of which 6.50 kilometer would be elevated from Hemayetpur to Aminbazar while 13.50 kilometers from Aminbazar to Bhatara would be underground. This project is expected to be completed by December 2028.

According to the Road Transport and Bridges Division, the MRT Line 1 and MRT Line 5 projects would ease the traffic congestion in the capital to a great extent and establish an environment-friendly, modern and safe public transportation system and thus ensure socio-economic development of the projects sites.

The government is currently constructing the MRT Line 6 project from Diabari of Uttara to Motijheel.

Revealing the implementation status of the Annual Development Programme (ADP) during the July-September period of the current fiscal year, Mannan said the executing agencies could spend 8.06 percent of the ADP allocation with an expenditure of Taka 17,344 crore.

The ADP implementation rate during the July-September period of the last fiscal year was 8.25 percent with an expenditure of Taka 14,927 crore.

The Planning Minister said Prime Minister Sheikh Hasina asked the authorities concerned to keep provision of road and rail in the MRT system in future side by side not affecting the beauty of Hatirjheel during the implementation of the MRT Line 1 project.

Sheikh Hasina also suggested not to disturb the densely populated areas during the implementation of the projects while opined that the Dhaka Mass Rapid Transit Company could be enlisted in the capital market.

While constructing new buildings for the government officials and employees, the Premier directed the authorities concerned to install net on windows and doors to prevent mosquitoes in every residential building, to keep modern waste disposal system,

necessary amenities for the drivers in the buildings as well as encouraging the use of cylinder gas or LPG since there would be no more new household gas connections.

Answering to a question, the Planning Minister said he has already asked the IMED to strictly monitor the price of various iteams under various components of different development projects.

At the very outset of the meeting, the Prime Minister was greeted with flower bouquets for receiving three international prestigious awards during her recent visits to USA and India.

The other projects approved in the meeting are Upgrading Begumganj-Sonapur portion of Feni-Noakhali National Highway to four-lane, 1st revised with Taka 1,485.38 crore, Upgrading Domar-Chilahati-Daolaganj, Domar-Jhaldhaka and Jhaldakha-Bhadurdargah-Dimla district highway into due standard and width with Taka 421.05 crore, Upgrading Kishoreganj-Karimganj-Chamraghat district highway into due standard and construction of Choina-Jashodol-Chouddashata Bazar with Taka 731.32 crore.