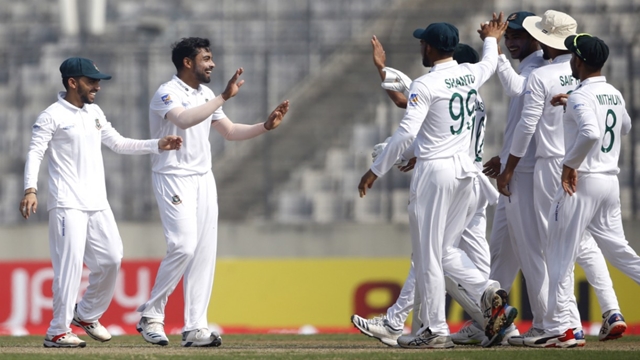 42.6: Zim 100/1 - Dropped! Massage comes down the track off Nayeem but doesn't manage to adjust to the flight and turn and edges it to the man at slip. The ball carried but Shanto drops it al slip. Another chance goes begging.

40.2: Zim 99/1 - Masvaure chips it to back to the bowler Nayeem Hasan who has dropped it. It was a difficult one but nevertheless a dropped chance. Bangladesh will be disappointed.

33.1: Zim 87/1 - Masvaure reaches fifty with a straight drive off Jayed. Eight fours in that knock.

Lunch: Zimbabwe reached 80 for the loss of just one wicket at Lunch on day one of the one-off Test against Bangladesh after they decided to bat having won the toss. Abu Jayed had gotten the hosts off to a good start, managing the edge of Kasuka's bat in the eighth over. The pacers kept the batsmen quiet but spinner Taijul Islam has been expensive so far in the morning session as he conceded 33 in his six overs so far. It has been a fine partnership between Masvaure and captain Craig Ervine as the duo has kept things solid for the visitors with a 73-run partnership. Nayeem Hasan, picked in place of Mehedi Hasan Miraz,  has been impressive so far. He used the flighted ones and also got the ball to turn sharply after pitching. The Zimbabwe duo have played him carefully with Nayeem beating the bat of Masvaure on a couple of occasions.

23.4: Zim 60/1: Ervine brings out the  reverse sweep to good effect against Taijul and gets a boundary to bring up the fifty partnership between him and Masvaure. The spinners have come in for a bit of stick with runs coming in since the 19th over.

Captain Craig Ervine has come to the crease and Masvaure survived a loud appeal for leg-before off Jayed in the 12th over. Bangladesh have started spin from both end with Taijul Islam and Nayeem Hasan bowling in tandem.

[Wicket] 7.6: Zim 7/1 - Abu Jayed Rahi gets the breakthrough that Bangladesh were looking for. Set the batsman up with an in-dipper in the previous delivery. This time he hits the perfect length just outside off stump and the batsman was perhaps looking for the in-swinger again. Ball zips off the surface after hitting the seam and gets the outside edge. Nayeem takes the catch at gully. Jayed is able to make use of that help in the surface in the early morning. The ball has swung for him this morning and just as his coach had wanted him to, Jayed has managed to breakthrough. KT Kasuza c Nayeem Hasan b Abu Jayed 2 (24b 0x4 0x6) SR: 8.33

6.1: Zim 5/0: First runs off the bat comes in the seventh over of the innings as left-hander Masvaure punches Ebadot through the covers for four.

No runs have come in the first four overs bowled by pace duo Ebadot Hossain and Abu Jayed before the former gave a wide to get Zimbabwe off the mark, the tourists are yet to score off the bat.

The two captains Craig Ervine and Mominul Haque at the toss.

Toss: Zimbabwe have won the toss and elected to bat against Bangladesh in the one off Test at Dhaka today.

Squads: As was expected, Bangladesh have two pacers and two spinners in the side. Nayeem Hasan comes in with Rubel Hossain out of the squad after the Pakistan Test. Mushfiqur Rahim also returns after sitting out the Pakistan Test.